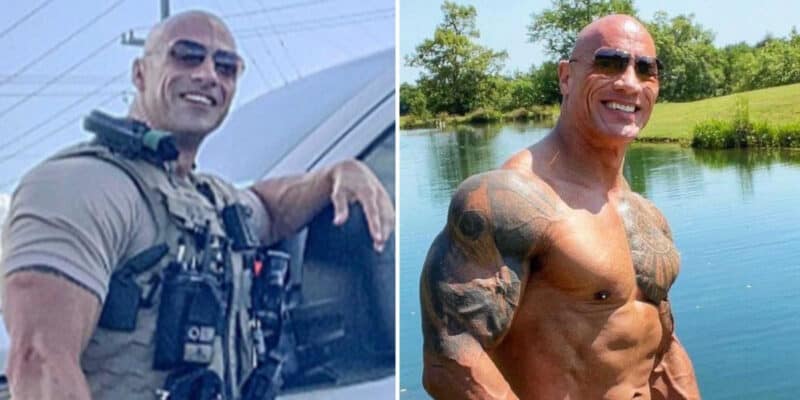 Dwayne “The Rock” Johnson is shocked over the internet’s discovery of his doppelgänger on social media, taking to Twitter to respond to the uncanny photos.

WWE wrestler-turned-actor Dwayne Johnson is one of Hollywood’s most profitable actors, most recently starring alongside fellow Disney alum Emily Blunt in Jungle Cruise (2021), the summer’s most thrilling adventure on the big screen. The film even recently was confirmed to be getting a sequel!

The Rock is one of the most active actors on social media, constantly celebrating his fans and their big achievements from his Iron Paradise gym in videos. While there’s no one like The Rock, fans discovered an Alabam Patrol Lieutenant that looks exactly like The Game Plan (2007) actor.

Guy on the left is way cooler. Stay safe brother and thank you for your service.

Oh shit! Wow.
Guy on the left is way cooler.
Stay safe brother and thank you for your service. One day we’ll drink @Teremana and I need to hear all your “Rock stories” because I KNOW you got ‘em 😂😈👊🏾🥃 #ericfields https://t.co/G38tOr68cW

The physical resemblance between Morgan County Patrol Lieutenant Eric Fields (left) and Dwayne “The Rock” Johnson (right) is uncanny. Both share the same physique, which, in itself, is enough reason for celebration and praise from Johnson.

After thanking Fields for his heroic service as a police officer, Johnson stated the two would share a drink of Johnson’s Teremana Tequila (which he recently promoted at Disneyland Resort) and talk about Fields’s “Rock stories.”

Johnson’s response to the side-by-side profile of both he and Fields shows that he’s just as amazed as fans are.

Dwayne Johnson is Disney’s latest legend, being a positive force in both the fan community and the executive world.

The professional wrestler has done it all, from starring as the Scorpion King in the Mummy franchise to teasing a presidential run. The proud dad stole the show in the Fast and the Furious franchise, as being the people’s champion while being the world’s highest paid actor and Hollywood star.

If you’re looking for fun Dwayne Johnson/Disney content, you’re in luck! The Rock is serving as the executive producer of Behind the Attraction, a thrilling, in-depth look at the history and secrets of Disney Parks’ most popular attractions.

You can watch the hilariously fun streaming series on Disney+ and see Johnson talk all things Disney, especially Jungle Cruise at Disneyland.

Catch The Jungle Cruise in theaters and on Disney+ Premier Access and see The Rock “rock” his latest role!

Are you a Rock fan? Let us know in the comments below!

Comments Off on Dwayne “The Rock” Johnson Found His Doppelgänger