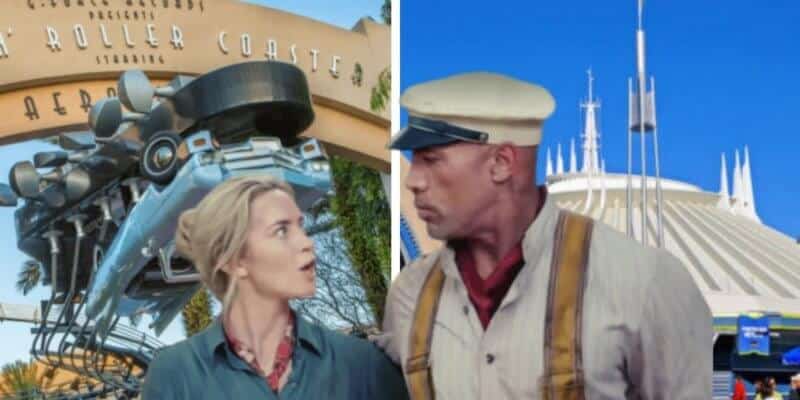 In an interview, Blunt and Johnson were asked what storyline they would put to certain Disney attractions. Dwayne created the Space Mountain storyline, where one person has the answers to life while the other doesn’t, and they want to go to Mars. Blunt carries on the story by explaining that they need to climb up a mountain to reach a special chip that helps fuel a single jet pack which can only bring one of the two to Mars.

The next attraction is Rock ‘n’ Roller Coaster Starring Aerosmith, where things take a very interesting turn. Blunt took the reigns on this story, saying that it has to star Dwayne riding a coaster with Aerosmith, but he would end up throwing up on the band since he gets sick on coasters. The whole film would be one slo-mo shot of Dwayne getting sick. I am not sure if I would be buying that movie ticket, Emily!

The next is the Wildlife Express Train. It would be about one man (Emily quickly interjects, “No, I’m in the movie too”) in the safari. Emily would join in while riding her pet elephant, and Dwayne would be on the train with his lion, who he is in love with. We’re not exactly sure what the plot of this film would be, but Emily made sure to say, “but I do succeed”.

Although the pair may make an excellent combination on screen, perhaps they should leave the writing to the writers in the writing room!

Which of these three stories do you think would work best? What Disney ride do you want to see turning into a film next? Let us know in the comments below.