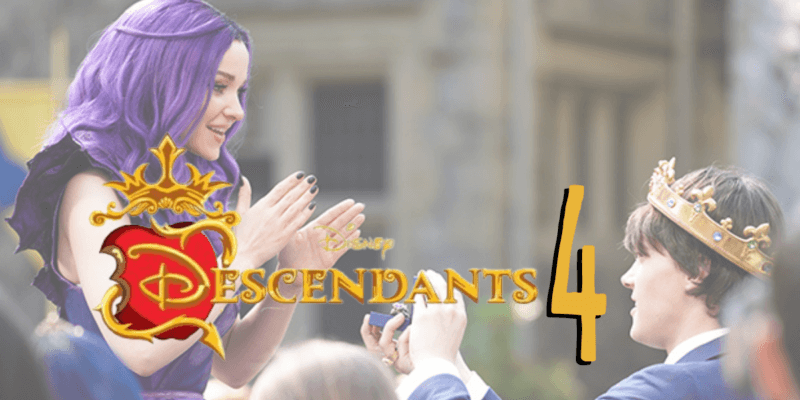 The first Descendants movie, which aired in 2015 on The Disney Channel, introduced the children of classic Disney villains like Maleficent and Cruella de Vil. The film was so successful that it spawned two more films, an animated spinoff series, several shorts, toys, and many recording albums.

Descendants: The Royal Wedding will be an epic celebration and appointment television, debuting on Friday the 13th in August 2021 on The Disney Channel, immediately after the 8 p.m. telecast of the all-new DCO Movie SPIN and preceding Disney’s Magic Bake Off.

While some fans have been demanding a fourth feature film, it looks like The Royal Wedding will have to serve as our official Descendants 4. Taking that fact in stride, let’s look at what we can expect from the possible series finale.

Descendants: The Royal Wedding will cover the story of Mal and Ben’s wedding. But of course, something goes awry before the nuptials can be exchanged. Much like Sleeping Beauty’s baby shower, an unexpected (and possibly uninvited) Guest shows up: Hades. The recently released trailer, “Mal and Ben’s Wedding” shows Hades busting into the wedding. Cheyenne Jackson, who voices Hades in this animated special, told D23 about watching the process of his character becoming animated,

They sent me a couple of early renderings, and it’s interesting to see what the artists pick up on when they’re trying to capture you as a character. Mine was, like, all about eyebrows. I just thought it was fun. I showed my kids and they thought it was really, really cool, and it was fun for me.” Stewart loves the hand-drawn aesthetic used in Descendants: The Royal Wedding. “The specific style is very classic, which I think is really cool,” he says. “It reminds me of the original Disney classics. It’s really nice that they would do that for us, and I think it speaks to what we’ve been able to do with Disney and to how we’ve represented these characters.”

Another plot point divulged in the trailer is Maleficent. We have not seen her since she was turned into a tiny lizard in Descendants 1. Being followed by Carlos’s dog, Dude, Maleficent leaps between heroes and villains making her way to the wedding. It will be interesting to see if this evil queen becomes “human” again.

Fans dedicated to Mal, Ben, Carlos, and Jay have been eating up any Descendants franchise content that Disney can produce, including dolls, apparel, collectibles, and more. It’s not a surprise that they are clamoring for a fourth film, too. But following the death of Cameron Boyce just as the third film was to debut, many of those in the cast have mentioned they do not want to do another film without him.

D23 reminds us that main characters like  Mal can count on her VK buddies like Evie (Sofia Carson) and Jay (Booboo Stewart) when she really needs them. D23 interviewed Booboo Stewart, and he discussed the tough goings-on at the wedding, “Jay, he’s trying to manage,” says Stewart. “Dealing with weddings isn’t his forte, but he’s trying to keep everything in check as well as he can.” Mal and Ben have overcome countless obstacles over the course of their relationship, so it’s almost fitting—poetic, even—that their wedding doesn’t go according to plan. Says Stewart, “I think it’s going to be very satisfying for the fans to see it all come together.”

Other than those few reveals, not much else is known about the upcoming Descendants 4. An animated “special” could run 30 minutes to an hour, but will most likely not be as long as a feature animated film. The Royal Wedding will undoubtedly be entertaining, and we’re eager to see what else we can expect!

Cast and characters in the Descendants 4 movie

Descendants 4, coming to us as an animated special will gather the whole gang together, starring Dove Cameron as Mal, Sofia Carson as Evie, Booboo Stewart as Jay, Mitchell Hope as Ben, Sarah Jeffery as Audrey, Melanie Paxson as Fairy Godmother, China Anne McClain as Uma, Jedidiah Goodacre as Chad Charming, Anna Cathcart as Dizzy, Dan Payne as Beast, Bobby Moynihan as Dude the Dog and Cheyenne Jackson as Hades.

These actors, of course, will only be lending their voices to the animation as the Disney Channel Original Movie will not be filmed in live-action.

Songs in the Descendants 4 movie

While we don’t yet have official information about what songs will be included in the Descendants 4 special, we do know, courtesy of D23, that the animated special will feature a brand-new song. Inevitably, Mal will be involved in the singing, but hopefully familiar tunes will make their way into the soundtrack, and we’ll love the new catchy song!

Those craving more Descendants music can look to Broadway, where Music Theatre International has licensed a full two-act (as well as a one-act version) of Descendants: The Musical.  The Overture can be heard for free on the theatre site, as well as musical style songs from Descendants 1 like Better Together, Rotten to the Core, Evil Like Me, Good is the New Bad, Ways to be Wicked, Did I Mention (a longer version),  and everyone’s favorite Chillin’ Like a Villain.

Other rumors around the Descendants 4 movie

There are no current plans to extend the Descendants animated series or to produce a Descendants 5,  but a comment regarding the upcoming animated special has us wondering if other characters from Auradon have their own stories coming up. Disney released that,

“Gary Marsh, president, and chief creative officer, Disney Branded Television, said, ‘Descendants introduced a fantasy world of stories and characters, anchored in Disney mythology. For the past six years, it captivated young viewers and grew to become among Disney Channel’s biggest entertainment franchises ever. It had the benefit of immensely talented stars, who we now welcome back for this animated Royal Wedding special that will bridge the audience to what we hope will be a new chapter of compelling Descendants stories and characters yet to come.”

This really hints that we might get more short stories or other Descendants movies about Dizzy, Smee’s twins or even Celia Facliér!

We’re hoping that the Descendants animated special will appear on Disney+ after it airs as a Disney Channel Original Movie so more Disney fans can watch it on repeat! Stay tuned to Inside the Magic for more Descendants-related news and updates!

Are you ready for Descendants 4 – Descendants: The Royal Wedding? Leave us a comment below!