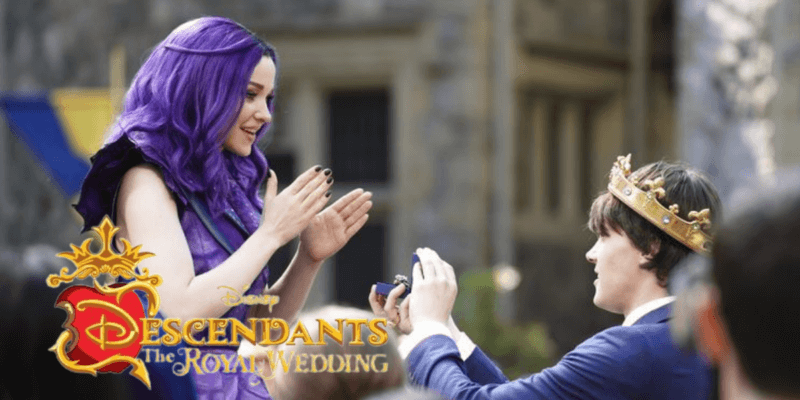 The news is finally here! During the thirty-minute-long finale episode of Secrets of Sulphur Springs, we got our biggest Descendants news yet! Descendants: The Royal Wedding will debut on The Disney Channel on Friday, August 13th, 2021.

We hear Mal’s voice echoing over a magical animation: “A million moments lead to this, where bride and groom will share a kiss…” Mal and Ben will be getting MARRIED! Descendants: The Royal Wedding will debut this summer!

Earlier this week, Descendants stars took to Twitter on behalf of Disney Channel and Descendants 3 to give us sneak peeks of today’s news, but really gave nothing away! Queen of Mean (Princess Audrey, Sleeping Beauty’s daughter) Sarah Jeffrey had promised it would cause our jaws to drop and Boo Boo Stewart (Jay, Jafar’s evil heir) was hinting at just as much. Did anyone notice they were both in a recording booth for these teasers?!

We can expect Descendants: The Royal Wedding to debut this August 13, 2021, and Hades will surely make an appearance with the royal family (will Maleficent appear, too?), as his flaming hair flashed on the screen. In the new trailer, we hear Uma’s evil laugh. This Disney’s heroes and villains royal event will be an animated special that invites viewers to Mal and King Ben’s wedding day and will premiere this summer on Disney Channel. Check out the animated trailer that hit in July 2021:

Can we expect Dizzy to create the striking outfit that will be villain Mal’s wedding dress? Surely they will create a beautiful Disney Descendants Mal doll out of the animated feature’s new look! D23 shares more information on the upcoming event:

The original cast of Descendants are returning to their popular roles and lending their voices to the animated series, including Dove Cameron as Mal, Sofia Carson as Evie, Booboo Stewart as Jay, Mitchell Hope as Ben, Sarah Jeffery as Audrey, Melanie Paxson as Fairy Godmother, China Anne McClain as Uma, Jedidiah  Goodacre as Chad, Anna Cathcart as Dizzy, Dan Payne as Beast, Bobby Moynihan as Dude the Dog, and Cheyenne Jackson as Hades. Descendants: The Royal Wedding will acknowledge the absence of the character Carlos, played by the late Cameron Boyce, in the storyline and Boyce’s memory also will be honored in the telecast.

Gary Marsh, president and chief creative officer, Disney Branded Television, said, “Descendants introduced a fantasy world of stories and characters, anchored in Disney mythology. For the past six years, it captivated young viewers and grew to become among Disney Channel’s biggest entertainment franchises ever. It had the benefit of immensely talented stars, who we now welcome back for this animated Royal Wedding special that will bridge the audience to what we hope will be a new chapter of compelling Descendants stories and characters yet to come.”

The wait is nearly over for the most anticipated moment in #DisneyDescendants history! ? The animated special of Mal and Ben’s ceremony is one you won’t want to miss ? #WatchOnDisneyChannel

Many Descendants fans felt that after the passing of Cameron Boyce, who played the teenage character of Cruella De Vil’s son Carlos, the franchise had concretely ended after just three films. Carlos was an integral part of the main iconic Disney heroes (with Mal, Jay, Evie, and China Ann McClain as Uma, among others), and he will be missed greatly. We’re grateful for his presence in those three films but glad that Carlos will also live on in other ways like this animated special, which may serve as a sort of Descendants 4.

In mid-2020, Sarah Jeffrey shared her feelings about future Disney’s Descendants projects including a Descendants 4 (without giving away any plans for a fourth movie) with Entertainment Tonight saying,

“It’s such a cool world that they’ve created. There are so many different possibilities,” Jeffery explained. “I feel like a Descendants 4 could totally happen, but also a spinoff could happen, with new characters and new daughters and sons of princesses and princes and other villains. You really have endless possibilities there.”

“I will be forever grateful for Descendants and the family I made there and the experiences I had,” she later added. “So I would love to do something.”

These comments from Jeffrey left us hopeful that we might see a fully animated series, a Descendants 4 film, or perhaps a villainous offspring spinoff television show. It looks like we’ll finally be getting a big Descendants fix with tonight’s news!

Disney fans can catch all three Descendants movies right now, available on Disney Plus, as well as music videos and musical numbers from the Disney Channel Original Movie (plus some Descendants-Zombies mashup songs) on Spotify and other music apps.

Shop Disney Descendants dolls and villain kids costumes to enhance your Descendants movie fun. This film series is one that’s close to our hearts, and we’re just “Rotten to the Core!”

Leave us a comment with your thoughts on this massive Descendants news about the royal wedding!