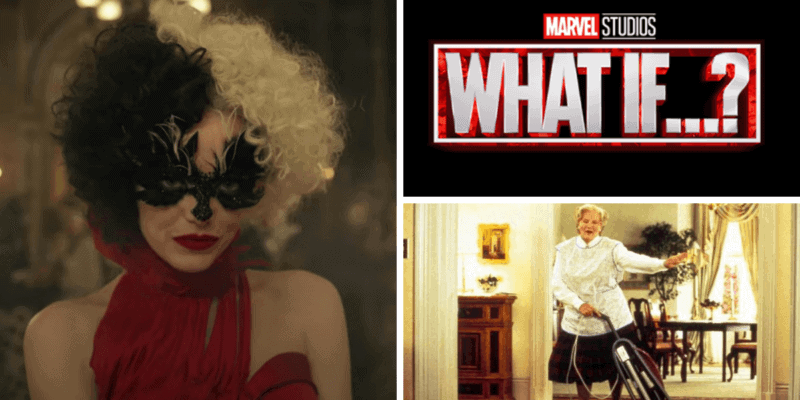 Where has the summer gone? It seems like just yesterday we were celebrating the beginning of summer with the release of Raya and the Last Dragon to all subscribers and the start of Marvel’s hit new series, Loki. Now, Disney has released its August lineup — which means no Loki and kids gearing up for school.

Disney+ is home to hundreds of movies and television shows and provides a platform for not only classic Disney movies and Disney Channel shows, but also for Pixar, Star Wars, Marvel, National Geographic, and more! The number of choices can seem overwhelming, along with keeping up with the newest releases.

Here, we will break down all of the shows and movies coming to Disney+ this August, courtesy of What’s On Disney Plus.

“Monsters At Work” takes place the day after the Monsters, Incorporated power plant started harvesting the laughter of children to fuel the city of Monstropolis, thanks to Mike and Sulley’s discovery that laughter generates ten times more energy than screams. It follows the story of Tylor Tuskmon, an eager young monster who graduated top of his class at Monsters University and always dreamed of becoming a Scarer until he lands a job at Monsters, Incorporated, and discovers that scaring is out and laughter is in. After Tylor is temporarily reassigned to the Monsters, Inc. Facilities Team (MIFT), he must work alongside a misfit bunch of mechanics while setting his sights on becoming a Jokester.

Turner & Hooch is another new series from Disney, based on the classic 1989 film of the same name, starring Tom Hanks.

Continue the journey with these two crazy chipmunk brothers as they live their lives and have fun adventures in a beautiful city park.

If you could tell any story with the team of talented artists at Walt Disney Animation Studios, what would you create? Welcome to Short Circuit, an experimental, innovative program where anyone at the Studio can pitch an idea and get selected to create their own short film. Season 2 features five all-new short films.

Short Circuit short films will include the titles Dinosaur Barbarian, Going Home, Crosswalk, Songs to Sing in the Dark, and No. 2 to Kettering.

“Marvel Studios Legends” serves as an exciting refresher for the various heroes and villains making their way to the highly anticipated streaming shows premiering on Disney+, setting the stage for the upcoming adventures. The episodes will feature Peggy Carter, The Avengers Initiative, and The Ravagers.

After winning a scholarship competition, four gifted orphans are recruited by the peculiar Mr. Benedict for a dangerous mission to save the world from a global crisis known as The Emergency. Reynie, Sticky, Kate, and Constance must infiltrate the mysterious L.I.V.E. Institute to discover the truth behind the crisis. When the headmaster, the sophisticated Dr. Curtain appears to be behind this worldwide panic, the kids of “The Mysterious Benedict Society” must devise a plan to defeat him.

While there are six books in The Mysterious Benedict Society, Disney has not announced whether or not the show will return for a second season.

Everybody’s favorite talking Chihuahuas are back in Disney’s Beverly Hills Chihuahua 2, the comedy that’s a pack of outrageous fun for the whole family. Puppy mayhem turns the lives of newlywed Chihuahua parents Papi and Chloe upside down when their rambunctious, mischievous puppies present one challenge after another. But when their human owners end up in trouble, the tiny pups will stop at nothing to save them—because in good times and hard times, the family always sticks together. So Papi, Chloe and the puppies embark on a heroic adventure, proving once again that big heroes come in small packages. Featuring an all-star cast, including George Lopez (voice of Papi), this heartwarming tale of the meaning of family, friendship and loyalty is a special breed of fun—times five.

Have yourself a Beverly Hills Chihuahua marathon because all three movies will be available on Disney+ on August 6!

Papi is back and ready to party with his two–and four–legged family as they move into a posh Beverly Hills hotel, complete with a luxurious doggy spa. But there’s trouble in puppy paradise when Rosa, the littlest member of the pack, feels smaller and less special than ever. Now it’s up to Papi to help Rosa find, and celebrate, her inner strength, which turns out to be bigger than she ever dreamed.

The eccentric dad of three children dresses as a British nanny so he can care for his children at the home of their mother in this touching comedy.

“What If…?” flips the script on the MCU, reimagining famous events from the films in unexpected ways. Marvel Studios’ first animated series focuses on different heroes from the MCU, featuring a voice cast that includes a host of stars who reprise their roles. The series is directed by Bryan Andrews; AC Bradley is head writer.

Two 13-year-old best friends embark on the adventure of their lives when they discover a mermaid named Aquamarine in a swimming pool.

The six-episode, intimate and extraordinary adventure of baby animals, from the safety of the womb to the uncertainty of birth and their tentative first steps. Each episode sees the incredible transformation of a different iconic animal, full of wonder and emotion. “Growing Up Animal” is the magical story of a mother’s instinct to nurture and her infant’s drive to survive.

Season two of “Diary of a Future President” continues the origin story of Cuban American and future leader Elena Cañero-Reed as she enters the seventh grade. Told using the narration of excerpts from Elena’s diary, this coming-of-age 10-episode series and family comedy follows Elena through the ups and downs of middle school which set her on the path to becoming the president of the United States.

Eragon tells the story of a young man, named Eragon, who discovers a dragon egg. When the dragon hatches, Eragon sets forth to restore the legacy of the land’s Dragon Riders and, hopefully, overthrow the evil Monarch who has taken over the land of Alagaesia, where Eragon lives.

Originally premiering on Disney+, on May 28, Cruella originally required viewers to have Premier Access, which cost an extra fee. However, on August 27, it will be available to all Disney+ subscribers.

Estella is a young and clever grifter who’s determined to make a name for herself in the fashion world. She soon meets a pair of thieves who appreciate her appetite for mischief, and together they build a life for themselves on the streets of London. However, when Estella befriends fashion legend Baroness von Hellman, she embraces her wicked side to become the raucous and revenge-bent Cruella.

Narrated by 12-year-old social media star Txunamy Ortiz, the half-hour special will celebrate the empowering attributes of Disney princesses and queens through reimagined performances of their iconic songs.

After an accident in the mysterious lab of mad scientist Dr. Simon Barsinister, an ordinary beagle finds himself with extraordinary powers, and the ability to talk! Armed with a fetching superhero costume, Underdog vows to protect the beleaguered citizens of Capital City, particularly a beautiful spaniel named Polly Purebred. When a diabolical plot by Barsinister and his overgrown henchman Cad threatens to destroy Capital City, only Underdog can save the day.

And there you have it! We hope that you have found this list and breakdown helpful when it comes to deciding which one of these amazing shows and movies you would like to stream! If you have not yet signed up for Disney+, you can get started by clicking here!

Which film or television show are you most looking forward to streaming in August? Let us know in the comments!