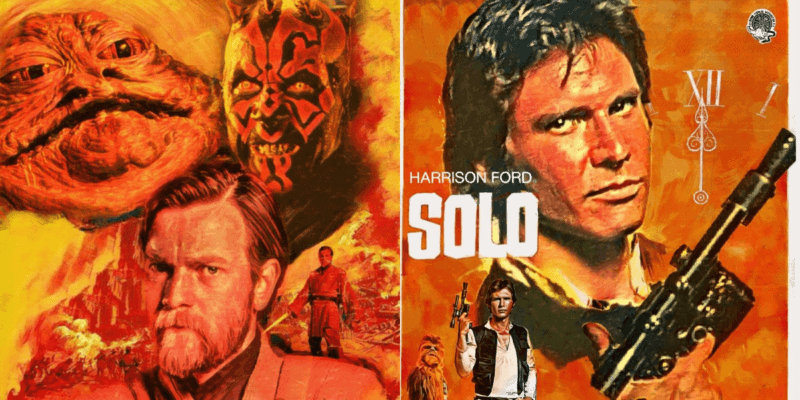 The Star Wars universe is one of the most influential fictional works in history. Still, most of its roots come from classic Western movies that creator George Lucas drew inspiration from while creating his own galaxy far, far away.

A talented Star Wars fan has reimagined posters of classic Westerns and replaced them with characters like Obi-Wan Kenobi, Darth Vader, and Darth Maul, perfectly combining the two worlds.

Scadarts, an impressive artist on Instagram, has reimagined classic Star Wars characters into famed posters from popular Spaghetti Westerns and American Westerns from the 1950s and 1960s. Replacing the central characters with Star Wars figures like Obi-Wan Kenobi and Jabba The Hutt, the poster boasts some of the best fan-made artwork recently made.

Everything about Star Wars screams “Western” with intense showdowns between gunslingers like Han Solo and Greedo in A New Hope and antiheroes saving the day. The Star Wars saga shares its origins with Westerns, particularly Spaghetti Westerns. Sergio Leone’s Fistful of Dollars (1964) and The Good, the Bad, and the Ugly (1966) with legends Clint Eastwood and Lee Van Cleef are the stuff of legend, inspiring everyone from George Lucas to Quentin Tarantino. In particular, The Mandalorian showrunners Jon Favreau and Dave Filoni go back to Leone’s masterpieces in their popular Star Wars series.

Scadarts was inspired by director Sergio Leone’s work as well. You can see his work below:

A Fistful of Credits

The Good, The Bad, and The Ugly

This was complicated to make but I’m very happy with the end result.

Im looking doing one more to complete a western trilogy.

The D does not exist

These new posters are by far some of the most impressive fan-made artwork in recent times, as it’s no easy process taking out old characters and putting new ones in without ruining the essence of the orignal work.

I can’t wait for multiverse time shenanigans in the mcu.

What did you think of the first episode?

Related: A Surprising ‘Star Wars’ Character Is the New “Mandalorian”

Star Wars is undoubtedly western, whether you know it or not. Of course, the Skywalker Saga and its related stories occur in space, but the narrative and cinematic themes are wholeheartedly Western.

The Western genre took American audiences in the 1950s by storm, with hundreds of feature films coming from legends like John Ford and John Sturges. While Japanese cinema spawned this new genre with films like Seven Samurai (1954), the world was hooked to America’s sweeping landscapes, tough actors like John Wayne, and action-packed stories.

Now, new generations are being inspired by stories taken from the greats. Hopefully, with Luacsfilm’s new directions and steps taken to tell greater stories, we’ll see Star Wars continue to grow and break through barriers in storytelling.

What do you think of these fan created Star Wars movie posters? Let us know in the comments!