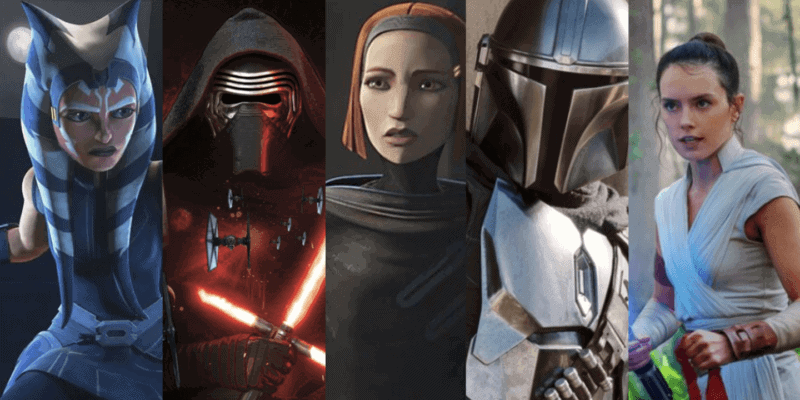 Whether you became a die-hard Star Wars fan thanks to George Lucas’s original trilogy, Disney’s sequel trilogy, or even Dave Filoni and Jon Favreau’s The Mandalorian, there’s no doubt that certain characters have impacted you more than others.

Related: This ‘Star Wars’ Fine Jewelry Line Is From Another Galaxy

Sometimes, the best way to share your fandom is to wear it on your sleeve — or around your neck, in your ears, and on your fingers, in this case! RockLove Jewelry recently announced their incredible new line of eight kyber crystal necklaces inspired by various lightsabers in a galaxy far, far away.

Now, the company has released a supplemental jewelry line that features five fan-favorite characters from various points in the Star Wars timeline — Ahsoka Tano, Din Djarin (The Mandalorian), Bo-Katan Kryze, Rey, and Kylo Ren are all featured in these gorgeous new pieces.

The $99 sterling silver Ahsoka Tano lightsaber necklace — which can be purchased with a coordinating set of $75 earrings — pays homage to Tano’s (Ashley Eckstein/Rosario Dawson) duel white lightsabers. Fans of both animated series Star Wars: The Clone Wars and live-action show The Mandalorian will be familiar with the former Jedi’s weapons.

The official description of the Star Wars necklace reads:

Inspired by AHSOKA TANO’s iconic personal weapons as seen in STAR WARS: THE CLONE WARS and THE MANDALORIAN series, this dual strand necklace highlights the unique lengths of both the regular lightsaber and shoto lightsaber. Three-dimensional and sculpted in sterling silver, each blade is suspended within lengths of sterling cable chain and layered one inside the other for an effortlessly stylish look.

RockLove has also introduced two new rings featuring Din Djarin (Pedro Pascal) and Bo-Katan Kryze’s (Katee Sackhoff) beskar helmets. The rings can be worn together to show your commitment to Mandalorian culture, or separately to display your loyalty to your favorite character.

The $99 Din Djarin ring is described as:

Sculpted in sterling silver and plated in polished gunmetal rhodium, THE MANDALORIAN Helmet Ring is an homage to DIN DJARIN, the legendary bounty hunter and lead character of the hit series The Mandalorian. Enhanced with hand painted black enamel, the ring features Mando’s helmet and along the band, the mantra “THIS IS THE WAY.” Three-dimensional, the domed helmet is hollowed beneath to be lightweight and comfortable for everyday wear.

Also priced at $99, the description of the Bo-Katan ring reads:

Sculpted in sterling silver and antiqued for contrast, the BO-KATAN Helmet Ring is an homage to Bo-Katan Kryze, the legendary leader of the Nite Owls in the hit series The Mandalorian. Every ring is one of a kind, enhanced by a purposefully distressed vibrant blue enamel, emulating the personalization Bo-Katan added to her own bounty hunter headgear. Adorning the band in raised text, the elite Mandalorian unit “NITE OWLS.” Three-dimensional, the domed helmet is hollowed beneath to be lightweight and comfortable for everyday wear.

The final new addition to the RockLove Star Wars jewelry collection is a necklace that features Rey (Daisy Ridley) and Kylo Ren’s (Adam Driver) crossed lightsabers, a reference to the duo’s strong connection that stems from their powerful Force dyad.

Related: Celebrate the Return of ‘The Mandalorian’ With Limited-Edition The Child Necklace

The official description of the $99 Kylo Ren and Rey necklace reads:

Sculpted in sterling silver, KYLO REN and REY’s iconic lightsabers clash in a pendant honoring the dyadic relationship between anti-hero and hero in the final episodes of the STAR WARS SKYWALKER SAGA. Where the three-dimensional lightsabers cross, a carved energy-burst features a brilliantly faceted white crystal. Antiqued for contrast, the pendant hangs from an adjustable sterling silver cable chain.

All items featured here are currently available for purchase on RockLove Jewelry’s website.

Precious metals are rare and coveted metals that have a high economic value, such as gold, silver and rhodium. The costs of precious metals fluctuate with the global economy and continue to rise in value. RockLove is handcrafted in the highest quality precious metals and while our prices have increased, so has the innate value of your jewelry.

Which piece of Star Wars jewelry are you going to add to your collection first?