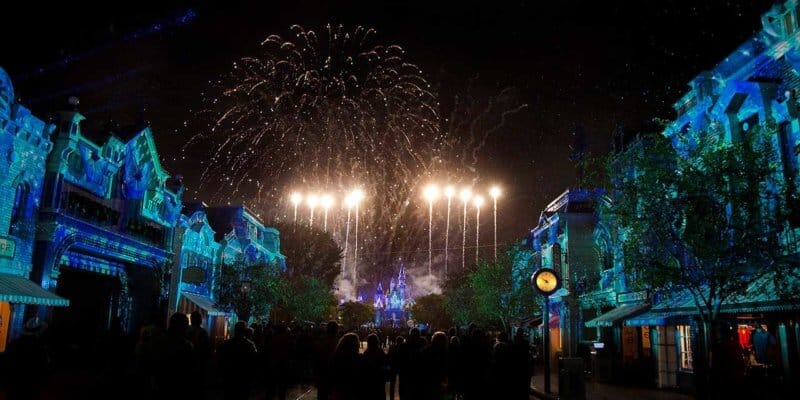 Fireworks are the quintessential way to end the perfect day at a Disney Park. There are few things more special than ending your Disneyland day with a viewing of a magical firework show. If you are heading to Walt Disney’s original Magic Kingdom and you want to know everything there is to know about watching fireworks, here is our guide to fireworks at the Happiest place on Earth  (plus, you can click here to book a trip yourself!).

Disneyland originally opened on July 17, 1955, and over the years the theme park resort has brought countless firework shows to delight Guests night after night. From special events to seasonal festivities to nightly classics, there has been a Disneyland firework show for every fan.

Per the Disney fandom wiki, a list of Disneyland Resort firework shows is as follows:

Rock your world at Mickey’s Mix Magic, an extravaganza bursting with magical song tracks, kaleidoscopic projections and exciting lights and lasers guaranteed to electrify your soul!

The scene is set as state-of-the-art projections, lighting and lasers turn Main Street, U.S.A., Sleeping Beauty Castle and the façade of “it’s a small world” into dazzling displays of sight, sound and color.

On select nights, fantastical fireworks will add a pinch more pixie dust to the occasion. Attendees will be catapulted into a fun, family-friendly dance party sure to transform Disneyland Park into one of the greatest celebrations for Mickey and Minnie.

Music to Your (Mouse) Ears

Frightful Fun… with a Spirited Twist!

Presented throughout Halloween Time at the Disneyland Resort, this wicked display is a true Halloween treat for Guests of all ages.

Your nocturnal delight kicks off with an eerie greeting from your “Master of Scare-omonies” Jack Skellington and his ghostly dog Zero—spirits from Tim Burton’s The Nightmare Before Christmas. As Jack and Zero fade into the night leaving you to enjoy what’s to come, settle in and embrace the jump-worthy collision of sights and sounds—soaring flames, projections of rising ghosts and classic Disney villains like Maleficent and Ursula the Sea Witch—all set to a medley of Halloween-inspired songs… one showstopper after another.

Finally, as you reach the grand finale, there’s no need to be shy. Feel free to sing—or scream―along! Plus, on select nights, you’ll also be able to watch sparkling fireworks possess the sky.

Best Places to View Disneyland Fireworks Inside the Park

If you have valid theme park admission, you will have the opportunity of viewing Disneyland fireworks up close inside the park. Of course, the best fireworks views come from being inside the Park, and depending on where you are viewing the fireworks from, you can have an entirely different, magical experience every time.

Here is a list of our favorite places to watch the fireworks inside Disneyland Park.

Note that Disneyland fireworks may be overwhelming for kids with sensitivities. You know your family best, but speaking with a Cast Member could help you find the perfect viewing location for your kids’ and family’s needs. Click here to reach out to Guest Services regarding Guests with disabilities, sensitivities, and more.

Of course, whenever we think of watching Disney Parks firework shows, the castle comes to mind. And for good reason! For years, firework shows at the Disneyland Resort have utilized projection-mapping technology to create amazing scenes on the facade of Sleeping Beauty Castle. Plus, if you are standing near the castle, you will also be able to see projections on the Matterhorn — these are epic during Disneyland Forever (which premiered during the Disneyland 60th anniversary)!

The facade of the “it’s a small world” attraction makes it the perfect place to view projections and pyrotechnics during the Disneyland firework shows. This area does not tend to be nearly as crowded as Sleeping Beauty Castle, so we recommend grabbing a spot here if you want to be around fewer people.

The area around the Rivers of America — specifically the Fantasmic! viewing area — is perfect for watching fireworks. It is a very unique setting right near New Orleans Square. We don’t recommend watching fireworks here if it is your first-ever viewing at Disneyland. But if you want to mix up your fireworks viewing routine, this is a great place to be.

Watching the fireworks while riding Big Thunder Mountain Railroad is a bucket-list item for Disneyland and Disney World fans alike! If you time it right, you could be one of the lucky Guests who gets to view the larger-than-life fireworks display while riding the Wildest Ride in the Wilderness. The pyrotechnics look absolutely breathtaking, and if you have never experienced a roller coaster ride while fireworks are going off, be sure to add this to your Disney Parks bucket list.

Best Places to View Disneyland Fireworks Outside the Park

We have an entire article dedicated to viewing Disneyland firework shows outside the theme park. For more information, click here.

Related: Disney Ticket Prices Will Be HOW MUCH in the Future?

A Disney Parks firework show is an experience like no other. The entire show is magical, but of course, there are certain moments that you can’t miss.

We don’t want to completely spoil every Disney firework show in existence. However, we will say this: do not skip the finale. Every Disney firework show is special in its own way, with special moments that resonate with each Guest a little differently. The finale, though, is always the best part. It is during this time when Disney wraps up the show in its own perfect bow — and offers Guests the perfect “kiss goodnight” after their magical Disney day.

Want to know how to get to Disneyland? We’ve got you covered.

If you are driving to the Disneyland Resort, please refer to the following parking guide, per Disney:

Please park at the Mickey & Friends and Pixar Pals Parking Structures if you are travelling:

Please park in the Toy Story Parking Area if you are travelling:

Please note: You may be directed to an alternative parking location.

If you are flying, we recommend booking a flight to LAX (the closest major international airport with many direct flights) or John Wayne Santa Ana Airport (the closest airport to the Parks that is smaller but great for quick flights from Northern California or neighboring states). Note that Disney does not currently offer any airport shuttle to and from the Disneyland Resort and your airport. So, if you fly to Southern California, we recommend renting a car, using a ride share service, or booking a shuttle through your hotel (only if you are staying off-property).

Remember: An Authorized Disney Vacation Planner Can Help With All Your Disney Trip Details!

After the fireworks, you can simply walk back to your hotel, whether you are staying on Disney property at the Disneyland Hotel, Disney’s Grand Californian Hotel & Spa, or Disney’s Paradise Pier Hotel, or you are staying at a Good Neighbor hotel within walking distance of Disneyland. Some of the nearby hotels that are a bit farther away also offer shuttle services to and from the Parks.

If you are heading to Disneyland only to view the fireworks, we recommend arriving on Disney property at 4 p.m. That way, you have the entire late afternoon/early evening to scope out a firework viewing spot.

What is your favorite Disney firework show? Do you have a special memory associated with the Disneyland fireworks? Let us know in the comments and click here to book your next vacation!

Comments Off on Best Places to View Disneyland Fireworks