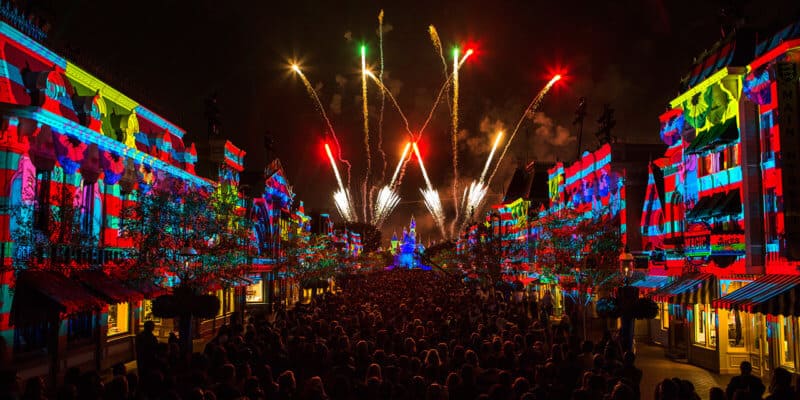 The Disney Parks are continuing their return to normal operations. More and more offerings are coming back to the Happiest Place on Earth — including fireworks at Walt Disney World Resort and Disneyland Resort. Now that Disney has confirmed that fireworks shows are returning this summer, we now have confirmation of when fireworks testing will begin.

Disney fans, firework lovers, and nighttime spectacular enthusiasts — if you want to know when fireworks are being tested at Disneyland Resort (and where you should be if you want a chance to see them), just keep reading!

Typically, Disney will notify the local community if they will be testing fireworks shows, and this summer is no different — especially since it has been well over a year since a full fireworks show took place at Disneyland Park.

Theme park fan and Disneyland local Magic & Walnut (@MagicAndWalnut) took to Twitter to share the news of the Disneyland fireworks testing scheduled to take place at Disneyland Resort on June 30, just a couple of weeks from now:

The return of fireworks to the skies above @Disneyland will take place four days ahead of the official July 4 debut of Mickey’s Mix Magic! A midweek test run has been scheduled for June 30, just a half hour after the park closes — and while #DowntownDisney is still open!

The return of fireworks to the skies above @Disneyland will take place four days ahead of the official July 4 debut of Mickey’s Mix Magic! A midweek test run has been scheduled for June 30, just a half hour after the park closes — and while #DowntownDisney is still open! pic.twitter.com/YErZvFXwvs

As pointed out in the Tweet above, the fireworks test on June 30 is currently scheduled to take place between 9:30 p.m. and 10:00 p.m. — just half an hour after the theme parks officially close for the day and while the Downtown Disney District is still open. This means that anyone who is on Disney property at around that time on June 30 will likely have the opportunity to catch a glimpse of the firework testing either from Downtown Disney, one of the hotels (Disney’s Grand Californian Hotel & Spa and Disney’s Paradise Pier Hotel are currently open), or from a Disneyland Resort parking lot (Mickey & Friends, Pixar Pals, Simba, or Toy Story).

We already saw this occur when Disney set off fireworks at Disney California Adventure in honor of the opening ceremony for Avengers Campus. And it was magical!

And, of course, if you live in the surrounding area or you are staying in a Good Neighbor hotel, chances are you, too, could be lucky enough to see or hear some Disneyland fireworks being tested.

Disneyland Resort is bringing back fireworks on July 4 with Mickey’s Mix Magic, a show that debuted in January 2019, and we can’t wait to see fireworks soar above Sleeping Beauty Castle and watch those projections on Main Street, U.S.A., for the first time in forever. You can watch the full Mickey’s Mix Magic show below:

Mickey’s Mix Magic will be the first fireworks spectacular to return to the theme parks since they began their temporary closure in March 2020. There’s no word on when other shows — like Fantasmic! at Disneyland or World of Color at Disney California Adventure — or parades — like Magic Happens or Paint the Night — will return to the Disneyland Resort. We also continue to await for the news of when Disneyland Forever, a Guest-favorite firework show, may return in the future. We’ll report back when we have more information.

Do you plan to head to Disneyland property to catch a glimpse of fireworks testing on June 30, or will you visit the parks on July 4 for Mickey’s Mix Magic? Let us know in the comments and click here to book your next vacation!