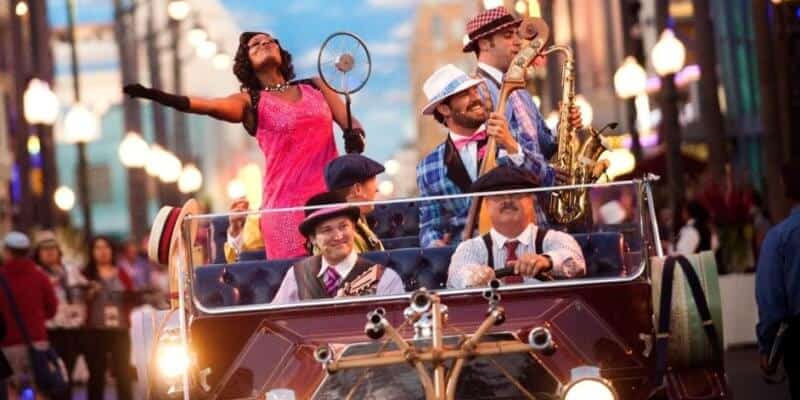 We have some exciting news for Disneyland Resort! As many Cast Members, firework shows, and entertainment activities have been reported to return over the last week, more exciting entertainment Guests can encounter down Main Street, U.S.A. in Disneyland and Buena Vista Street in Disney California Adventure has been announced!

According to OC Register today, Disney fans will be singing and dancing alongside some of our favorites again as they share more Disneyland entertainment will return, stating,

“The Citizens of Buena Vista Street have returned to DCA while Five & Dime, Pearly Band and the Main Street U.S.A. piano player are expected to be back soon.”

There is nothing more charming than walking down Buena Vista Street in Disney California Adventure. Set in the 1920s, Guests are transported back to a time when Walt Disney set his sights on California with “a suitcase and a dream”.

While enjoying views of old-time streets and shops, you might have a chance to bump into the Citizens of Buena Vista Street and encounter an unexpected conversation. How can you spot them? Well, you can’t miss them, their retro fashion speaks for itself!

Five and Dime band will be back to entertain us all soon as the official Disneyland website states,

To book the best band on Buena Vista Street, you don’t need a dime, pal, you need Five & Dime!

Get hip to the jive—this band’s the bee’s knees and the cat’s meow. These 5 guys from Chicago just arrived in town in a souped-up jalopy. With a lovely female vocalist named Dime on the mic, they’re destined for stardom— along with their good pal Goofy.

Heading to Disneyland soon? As you walk down Main Street, U.S.A., next to the Refreshment Corner in Disneyland Park, enjoy Disney classic songs and 1920s tunes from Disney’s very own ragtime piano player!

The Pearly Band, inspired by the band from the Disney classic Mary Poppins, has delighted Guests and step in time with Mary Poppins herself and Bert right in front of Sleeping Beauty Castle. Although we are unaware if these Disney characters will return, keep your eyes peeled for the Pearly Band coming soon!

Check back with Inside the Magic as we share more detailed information, including dates and showtimes of entertainment returning to Disneyland Resort!

Who are you excited to see return to Disneyland Resort? Let us know in the comments below!

Visiting Disneyland Resort soon? Let our friends at Academy Travel help you plan your most magical trip yet! Plus, they are EarMarked Diamond!