WATCH: Disneyland Castle Comes to Life After Historic Park Closure - Inside the Magic 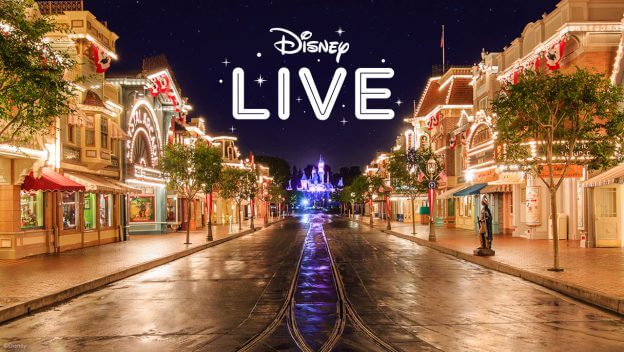 Magic is back at the Happiest Place on Earth! To celebrate Disney opening up the gates to Disneyland and Disney California Adventure, Disney hosted a special presentation on Monday night from inside Disneyland, Walt Disney’s original Magic Kingdom, the Disney Park that started it all!

The Disneyland Resort virtually takes guests inside the gates of Disneyland park and reawakens its unique magic that guests and cast have dearly missed over the last year. In this heartfelt presentation, Disney leaders will share messages of optimism and gratitude to the cast members of the Disneyland Resort.

After more than a year of closure the Disneyland Resort is pleased to provide a live glimpse of a shining symbol, reawakened: Sleeping Beauty Castle in the heart of Disneyland, representing a beacon of hope for Disney fans everywhere.

The presentation began with D’Amaro sharing that throughout the theme park closure, the lamp inside Walt Disney’s office above the Main Street firehouse has remained lit throughout the historic year-long closure of Disneyland Park.

“Throughout this past year, Walt Disney’s lamp has beacon of hope and optimism that Disneyland will reopen and once again be a source of joy and inspiration to all the world,” D’Amaro said.

He continued, “Standing here in the glow of Walt’s lamp, I can’t help but think of the thousands of Cast Members, Crew Members, Imagineers who have brought our parks, our hotels, retail locations, cruise ships, and adventures to life over the years. I want to thank all of you for being part of our team, and I look forward to having more of you back at work each and every day.”

Disneyland Resort Ken Potrock then joined on Main Street, U.S.A., to share his excitement for the original Magic Kingdom reopening again. He shared that he is “beyond thrilled” to be celebrating the “amazing Cast Members” this evening.

“As Walt said, ‘It takes people to make the dream a reality,’ and our Disneyland Cast Members have been bringing Walt’s dream to life for more than 65 years,” Potrock said. “We all know that you are the true spark that lights up our resort.”

He acknowledged the Cast Members who have been working throughout the theme park closure, no matter if they were working on property or from their homes.

From the heart of Disneyland, Disneyland Ambassadors Justin Rapp and Rafa Barron shared how meaningful it is for Disneyland to reopen this week — and for the Cast Members to experience the parks in the days before they reopen to the public.

“It’s time to reawaken the Disneyland Resort, and we’re so grateful to share this special moment with everyone,” Rafa Barron said.

As Sleeping Beauty Castle came alive, Walt Disney’s dedication speech played with “When You Wish Upon a Star” serenading viewers in the background. What a magical moment!

Catch the replay of tonight’s Disneyland presentation below:

Join us for a special moment tonight as we go inside the theme park gates of the Disneyland Resort and reawaken its unique magic that our guests and cast have dearly missed. Streaming here LIVE tonight at 8:30 p.m. PDT

About Disneyland:
Disneyland is where imagination is the destination. For young and old, big and small —it’s The Happiest Place on Earth! So gather with all the people who make you the happiest and come to the place where dreams come true.

The theme parks of the Disneyland Resort (Disneyland Park and Disney California Adventure Park) reopen on April 30. Disney’s Grand Californian Hotel & Spa reopens on April 29 (there is no word on when the Disneyland Hotel or Disney’s Paradise Pier Hotel will reopen). The Downtown Disney District will continue operations and will remain open to the public just as it has since July 9, 2020.

Are you excited for the Southern California Disney Parks to reopen this Friday? Did you get your theme park tickets and reservations yet? Let us know in the comments!

Click here to book a magical vacation at the Happiest Place on Earth!