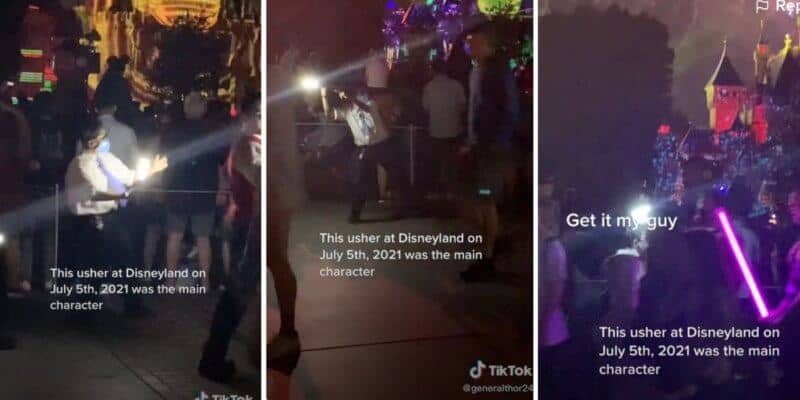 Now that fireworks have returned to Disneyland Resort’s Disneyland Park with Mickey’s Mix Magic With Fireworks, Guests and Cast Members are finally able to see Sleeping Beauty Castle and Main Street, U.S.A. light up once again every night all summer long!

With fireworks being gone for so long, some Guests may have forgotten what it was like to have Cast Members usher Guests through the parks during the show and after. With the amount of crowding that goes on in the area, Cast Members are there to help direct traffic to ensure Guests have proper walkways and can get where they want to go without too much chaos ensuing.

Recently, it seems one Cast Member really made sure both he and all the Guests around him were having a good time by letting loose and sharing a whole bunch of positive energy to the crowd. TikToker @generalthor24 posted a video of a Cast Member directing Guests during Mickey’s Mix Magic With Fireworks, which dancing, and it looks like he is having a blast:

The video creator was so enamored by the Cast Member that they announced that they watched the dancing more than the show itself. Considering this occurred the day after the show returned to Disneyland Park in well over a year, the Cast Members’ ability to attract attention successfully during the fireworks is a testament to how incredible those dance moves were!

Cast Members at Disney Parks have the ability to make a great day a magical one, and it is little instances such as this that give Guests a unique experience and also show them how happy Cast Members are to see the magic return to the theme parks after many of them lost their jobs due to the pandemic.

What do you think of this Cast Member’s dance moves? Let us know in the comments below.