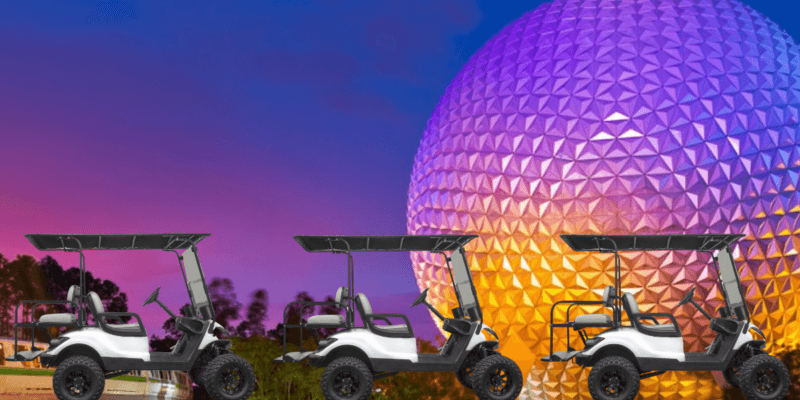 When Walt Disney World reopened its theme parks last summer after a months-long pandemic closure, there were a number of services and experiences that were suspended. Character meet and greets were suspended, FastPasses are still not available, and tram transportation from the theme park entrances through Disney World’s massive parking lots has no return date at the moment.

However, it seems that one theme park is improvising.

EPCOT, in an effort to help Guests return to their cars, has been reportedly using golf carts for parking lot transportation. After a long day of putting miles of wear and tear on their feet, it must be a relief for Guests to see a golf cart coming their way to offer a ride.

Twitter user Belle (@FiBelleFi) shared images of the Cast Members driving golf carts to assist Guests in going from their cars to the front of the park and back again.

Trams aren’t back yet but at EPCOT, there are several golf carts where cast will drive you to and from your parking spot

Trams aren’t back yet but at EPCOT, there are several golf carts where cast will drive you to and from your parking spot pic.twitter.com/xGGzJYqB4K

Some users pointed out that it didn’t seem to make much sense for golf carts to be used, as trams would be able to transport a higher number of Guests faster than golf carts can. However, it looks like the golf carts are only being used when the crowds are low. Belle shared in the comments thread that there was not a lot of parking activity at the time that she experienced this. So it is possible that Cast Members in golf carts were helping out in a spur-of-the-moment decision, or that they are only used occasionally.

Currently, the trams are the only form of transportation not being used at the Walt Disney World Resort. Monorails, hotel buses, and boats are all being used.

Disney has not said why the trams are not being used, nor have they given a timetable as to when the tram service will return. With buses being able to run, even at a limited capacity, it will hopefully not be too long until trams return to Disneyland Resort, as well as Walt Disney World.

Do you miss the Disney tram services? Let us know in the comments!

CLICK HERE to book your Disney vacation with our friends at Academy Travel — an EarMarked Diamond agency that can give you a free quote today!