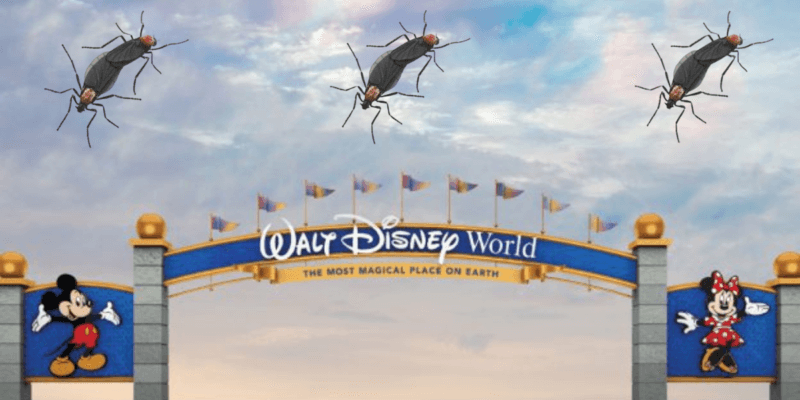 Vacationing at the Walt Disney World Resort in Florida can truly make Guests feel as though they are in a whole new world. Excitement is all around and magic is in the air. Unfortunately, so is something else that is less than magical — the dreaded lovebugs.

Twice every year, lovebugs swarm the Sunshine State and fly around in droves that are so heavy they can sound like pouring rain for the poor people who are stuck driving through them. Lovebugs mate for about four weeks, which is four weeks too long for not only Florida residents, but also Guests visiting the Florida theme parks.

So, what are love bugs, and when do they show up?

Lovebugs are a variety of flies that are found in Central America and the Southeastern United States. They are called lovebugs due to the fact that they are often seen in pairs during their mating season. The average life of a male lovebug is about three to four days and females is about two to three. In that time, the bugs mate, and the female will lay her eggs in decaying material on the ground. After they lay their eggs, the female lovebugs die.

After two to four days, the lovebugs hatch, and a new cycle begins all over again.

When Is Lovebug Season?

While brief, lovebug season happens twice a year and is extremely annoying. Lovebugs thrive during season changes and love warm weather, which makes places like Florida a prime location. Lovebug season lasts about four weeks and occurs from April to May and August to September — the bugs are in full force and can get so bad that driving through a mating area can sound like rain pouring on your car.

If you do get stuck driving through lovebugs, make sure to clean your car as soon as possible, as splattered lovebugs can actually damage the paint! Even Disney vehicles are not immune from the damage of lovebugs — take a look at the Disney Cruise Line bus that was unfortunate enough to drive through a lovebug swarm.

How to Avoid Lovebugs at Disney?

Unfortunately, there is only one real way to avoid the lovebugs while on your Disney vacation, and that is to not travel during lovebug mating season. Unlike mosquitos, Disney cannot keep the lovebugs from making their way into the Resorts, but luckily, the swarms seem to stay away. Occasional lovebugs can be found during April, May, August, and September at the theme parks.

For example, during a Disney World trip in early May, we definitely encountered some lovebugs while staying at Disney’s Caribbean Beach Resort. Though these bugs didn’t significantly impact our vacation, they were certainly annoying. However, as long as you are aware of lovebug season, it shouldn’t come as a shock to you if you see these insects on your trip.

If you truly don’t like bugs, then you can always opt for booking your vacation during a different time of year, such as January-February or November-December. If you do decide to travel to Disney World or Southeast Florida during lovebug mating season, be prepared to deal with the little black bugs who call the Sunshine State one of their homes.

Have you dealt with Florida lovebugs at Disney World? Let us know in the comments!