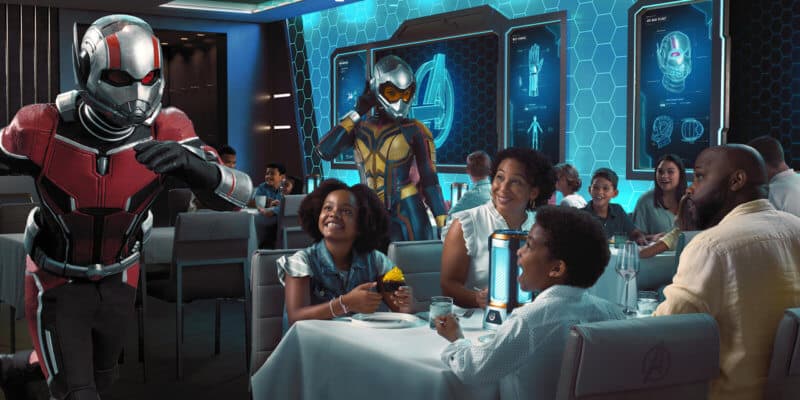 Disney’s newest cruise ship, the Triton Class Disney Wish, is set to give Guests an array of incredible experiences, the likes of which have never before been seen. From the Star Wars Hyperspace Lounge that will transport adult passengers to a galaxy far, far away to the Toy Story splash zone for little ones to the Worlds of Marvel restaurant that will delight super hero fans of all ages, the Wish is truly bringing Disney magic to life.

Now, new details have been revealed about what the “epic” dining adventure at Worlds of Marvel will entail — and it’s truly incredible! The Avengers Quantum Encounter will transport Disney Cruise Line Guests to the science-filled world of Dr. Hank Pym (Michael Douglas in the MCU), his daughter Hope Pym/the Wasp (Evangeline Lilly in the MCU), and Scott Lang/Ant-Man (Paul Rudd in the MCU).

Per the Disney Parks Blog announcement regarding the Quantum Encounter:

Watch the full video about the thrilling new experience inspired by the Marvel Cinematic Universe below:

Disney Parks Blog shared additional details about the experience, including how families onboard the Wish will be able to help control the “Quantumania”, so to speak, in the restaurant at any given time:

Every table at Worlds of Marvel will feature its own Quantum Core, “a brand-new device that can cause objects to shrink and grow remotely.” During dinner, you will assist Ant-Man and The Wasp as they attempt some small-scale trials, perhaps shrinking oversized luggage for easy stateroom storage. I wonder who overpacked… those super suits probably take up a lot of space!

When enough of the Quantum Cores are activated at the same time, the entire venue will become supercharged as energy pulses through the power channels in the walls and ceiling.

This isn’t the first time the Pym family has inspired a dining experience — the new Pym Test Kitchen and Pym Tasting Lab at Disney California Adventure Park’s Avengers Campus also draw inspiration from the Ant-Man (2015) and Ant-Man and the Wasp (2018) characters.

Previously, Disney issued a press release that described Worlds of Marvel as:

This upscale-restaurant-meets-technology-showcase will up the ante on the traditional “dinner and a show” concept. Outfitted with state-of-the-art Pym Tech and decked out in signature Stark-itecture style, the venue offers surprises in all shapes and sizes, from the tiniest design “Easter eggs” to the larger-than-life story that takes place.

True to its name, Worlds of Marvel will take families on a flavorful tour of the real and fictional settings of the Marvel Cinematic Universe, with dishes inspired by legendary locales like African Wakanda, Eastern European Sokovia and the Avengers’ home base of New York City.

Worlds of Marvel will feature an original storyline starring fan-favorite Avengers and an infamous foe.

The Disney Wish will officially join Disney Cruise Line’s existing fleet — the Disney Dream, the Disney Fantasy, the Disney Magic, and the Disney Wonder — when she takes her maiden voyage in June 2022.

Are you excited about Disney’s first-ever Marvel dining experience?

Whether you have a future cruise credit or want to book a brand new itinerary, the expert team at Academy Travel can help you plan a Bahamas Disney cruise to Castaway Cay, a Mexico Disney cruise, or a journey to any other destination worldwide!