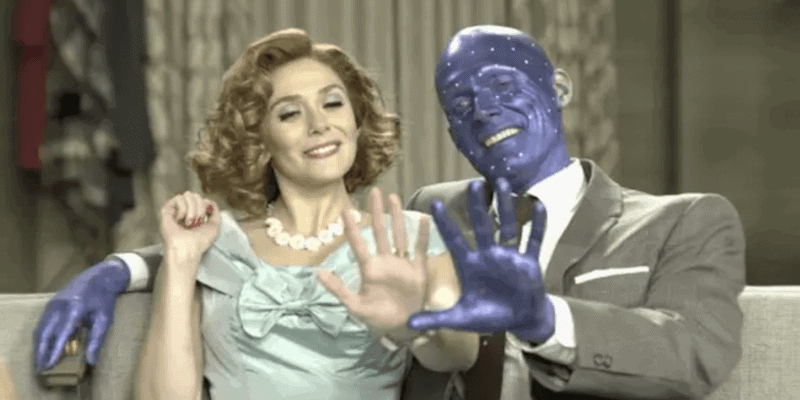 Sometimes, going behind the scenes can be a lot of fun and really enrich the magic of a television series or movie. While we’re not posting any spoilers here, WandaVision — the Marvel Cinematic Universe’s first Phase Four project and first TV series — was a lot of fun, even without any behind-the-scenes info.

The Series Has the MCU First All-Air Battle

Elizabeth Olsen (Wanda Maximoff/Scarlet Witch) was used to being flown in harnesses, but WandaVision was the first time there were multiple fliers, all battling at once.

This meant calling in fight and stunt coordinators, as well as a flight team. Olsen mentioned to Marvel about the last six weeks of production, “We’re always harnessed!” S

Olsen added that the experience, “was so fun, I love flying, I love doing the flying work. But it’s the first time Marvel’s really had to create a full fight sequence in the air.”

Paul Bettany Thought He was Done and Fired

After Vision’s death in the Avengers Infinity Saga, actor Paul Bettany thought he was mostly, if not all, done with the character. Without a formal goodbye from producers or creators, the call to visit felt like the last bell toll. Bettany told BuzzFeed:

“So I went in, I said, ‘Look, there’s just absolutely no hard feelings. It’s been a great run. Thank you so much.’ And they were like, ‘Are you quitting?’ And I went, ‘No, aren’t you firing me?’ And they went, ‘No, we were gonna pitch you a TV show.’ That’s how I found out.”

Yup, that’s right! Just like the title cards said. A live studio audience, dressed in the 1950s fashion, was brought in to film the first episode. And according to Marvel.com, even the crew was dressed appropriately, creating a really cool immersive experience for cast and crew alike. The family sitcom was fun to shoot, as Marvel shared:

“While both Elizabeth Olsen and Paul Bettany were nervous to work for the first time in front of a television audience (both had done live theater before), their worries were quickly put to rest the second the audience laughed. “I’ve never been allowed to be funny!” Olsen explains.”

Most of It Was Shot in Atlanta, Georgia

Marvel has shot many of its major films (and now series) in Atlanta, Georgia. The rich tax credit perks for local productions are enticing to Kevin Feige’s Marvel Studios, though a closed-set backlot was needed for the Westview town square.

For instance, MCU movies often use the Porsche Experience Center in Atlanta for Avengers Compound, but the bedroom flashback sequence in WandaVision was completely built from scratch to match the previous movies in an Atlanta studio. Likewise, Wanda’s ever-changing house was on set in Atlanta, as were the neighborhood streets and S.W.O.R.D.’s field operations.

Paul Bettany told TVLine that TV’s WandaVision had “more special effects requirements than Endgame.” Avengers: Endgame (2019) was the final movie in Phase Three of the MCU, and the conclusion of the Infinity Saga.

And, while WandaVision’s six-episode miniseries was at least double Endgame‘s run time (3 hours and 2 minutes), Vision’s screen time takes a lot of editing. In Disney+’s very detailed Marvel Studios Assembled: The Making of WandaVision, we learn that “every time Bettany sports Vision’s synthezoid face, that involves visual effects work. Onset, Paul Bettany only wears base makeup colors (with FX tracking dots) so those graphic artists can later go in to erase his ears, add his linear accents, and more.”

However, with the filmmaking techniques of the 1950s, Bettany wore solid blue makeup in order to replicate the proper tones for the film. Often, actors of this time period would actually use blue makeup (such as lipstick) so their lips would appear dark and red. Makeup artists on the production duplicated this look with Vision.

All productions go by working titles or even code names during production. It’s no surprise that WandaVision had its own working title. “Big Red”, the working name for WandaVision could have come from two places. “Big Red” could easily refer to Wanda’s power and her “Scarlet Witch” moniker.

Or, it could refer to the Big Red gum given to Vision by Herb at the meeting early in the series. Both options work and are equally enchanting!

Agatha All Along hit the top of iTunes and no one saw that coming! According to the LA Times, “everyone’s favorite theme song from the popular Disney+ series WandaVision has landed on both Billboard and iTunes charts upon its release.”

As soon as the song from the seventh episode hit, Kathryn Hahn’s character jingle debuted at No. 36 on its digital song sales survey with 3,000 downloads within two days.

The catchy sitcom tune was an integral part of the WandaVision Episode 7 soundtrack, which then soared to No. 1 on the iTunes soundtrack chart and has, as of March 2021, racked up more than 1.7 million pop culture streams on Spotify.

Did you already know any of these WandaVision fun facts? Leave us a comment with more that you’ve learned!

Comments Off on ‘WandaVision’ Fun Facts You Need to Know