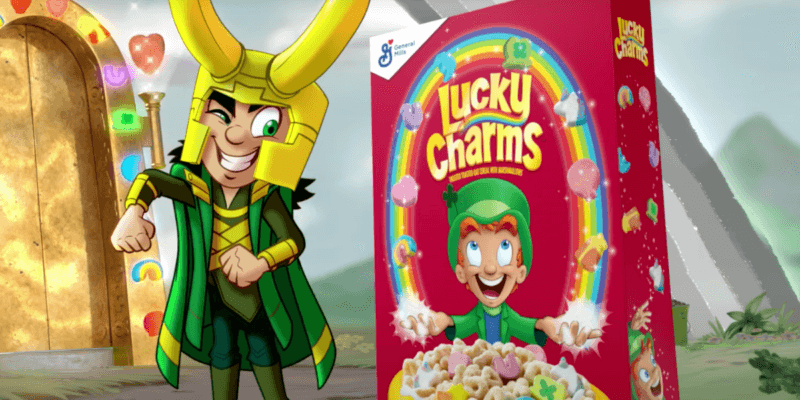 The Marvel Cinematic Universe has attempted arguably the most ambitious crossover events in the history of storytelling with films like Avengers: Infinity War (2018) and Avengers: Endgame (2019) that successfully intertwined stories from 10 years and 20+ films to both a resolution and a launching pad for future tales.

Now the MCU is crossing over with a balanced breakfast — perfectly balanced, as all things should be.

Loki, portrayed by actor Tom Hiddleston, has earned his reputation as the god of mischief in the Marvel Cinematic Universe. Infamous for scheming and shape-shifting his way into favor with the likes of big baddies Thanos (James Brolin) and The Grandmaster (Jeff Goldblum), the adopted brother of Thor (Chris Hemsworth) has become the charming antihero audiences can’t help but cheer for.

In a teaser video from General Mills and Marvel, Lucky Charms cereal — on shelves in U.S. grocery stores since 1964 — shape-shifts into a new “mischievously delicious” form — a Loki-fied riff on the famous Lucky Charms “magically delicious” slogan sure to make Marvel fans chuckle.

Watch the video for the limited edition Loki Charms from General Mills here, featuring Loki coveting the colorful marshmallows as sugary stand-ins for the Infinity Stones:

How to get a box of Loki Charms

You can get your very own box of limited-edition Lucky Charms, Loki Charms cereal, shipped directly to your door by ordering on Wednesday, June 9 — the same day Loki starring Tom Hiddleston and Owen Wilson premieres on Disney+. The store opens at 11 a.m. ET on Wednesday, but presale early access will be granted to those who can correctly guess a mysterious encryption password starting at 9 a.m. ET.

According to Den of Geek, General Mills will ship a limited supply of 3500 Marvel-branded boxes featuring an objectively adorable Loki character illustrated in the style of Lucky Charms cereal mascot, Lucky the Leprechaun. The dark green-hued box also features an image of actor Tom Hiddleston as Loki in the uniform of the Time Variance Authority (TVA), the sacred timeline watchdogs of the Loki series.

Loki Charms cereal can only be purchased through the Magically Delicious website for $8 per box, a price that includes shipping, while supplies last.

What time is Loki available on Disney+?

Loki, the latest series from Marvel Studios, premieres on Disney+ on Wednesday, June 9, 2021. While an official premiere time hasn’t been announced, Marvel fans presume that Loki will follow the same schedule as other Marvel Cinematic Universe series on Disney+, WandaVision (Elizabeth Olsen, Paul Bettany) and The Falcon and the Winter Soldier (Anthony Mackie, Sebastian Stan), and drop at 12 a.m. PT or 3 a.m. ET.

Assuming that the encryption password will be hinted at in Marvel’s Loki premiere, your best bet for securing a limited edition Loki Charms cereal box presale early access spot at 9 a.m. is checking out Loki Episode 1 as early as you possibly can!

Let’s see if the Tesseract proves to be a lucky charm for Loki afterall.

Are you loving this pun-tastic Loki and Lucky Charms Crossover? Let us know in the comments!