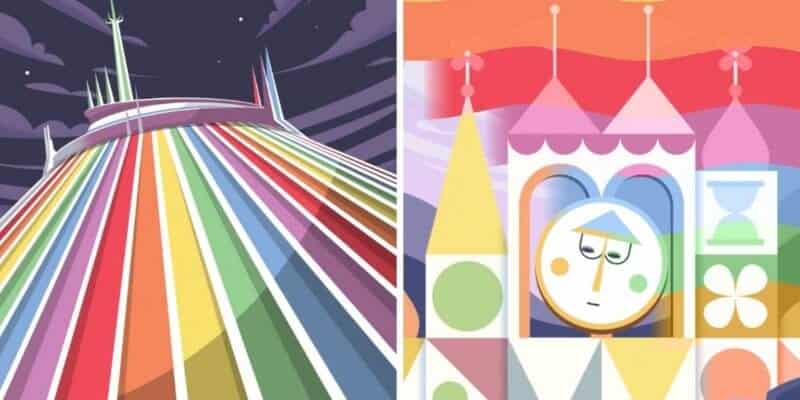 Both Images: Credit: Screenshot via My Disney Experience/Disneyland App

In honor of the LGBTQ+ community, the Disney Parks are celebrating Pride Month all month long! Not only are they bringing special merchandise and treats throughout the theme parks, but they are also transforming iconic Disney attractions so they “dazzle in the colors of the rainbow”!

Both My Disney Experience and the Disneyland App sent out notifications this evening saying “New Video for Pride Month. See iconic [Walt Disney World/Disneyland] attractions dazzle in the colors of the rainbow”, which you can see above.

Once you opened the app(s), a video began to play which showed several attractions transform to showcase the colors of the rainbow!

First up was “it’s a small world”, which you can see above. Initially, the video showed the iconic white and gold clock as is, but in the blink of an eye, the colors of the rainbow overcame the screen and the clock was instantly transformed!

Up next was the opening day attraction at both theme parks — Jungle Cruise!

Speaking of Jungle Cruise, did you know the popular theme park ride will soon be rethemed for Guests so they can enjoy a brand-new experience called Rivers Journey? This revamp is currently taking place at both Disneyland Park at Disneyland Resort and Magic Kingdom at Walt Disney World Resort.

Who’s ready to blast off into space? The next Disney World and Disneyland attraction to get a rainbow transformation is Space Mountain!

And of course, what’s Walt Disney World or Disneyland without Mickey Balloons? Both of the apps showed the iconic souvenir with a colorful rainbow design in honor of Pride Month.

There is Magic in Being Who You are

The video then ended with an image of either Cinderella Castle (for My Disney Experience) or Sleeping Beauty Castle (for Disneyland App) with the message “There is magic in being who you are.”

And lastly, both the Disneyland app and My Disney Experience sent a message that said “Happy Pride”.

Will you be celebrating Pride Month at Disneyland or Walt Disney World? Let us know in the comments below.