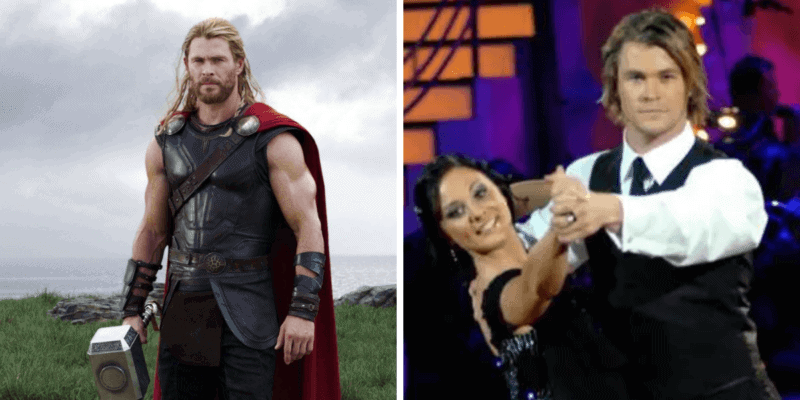 It may be hard to picture anyone but Chris Hemsworth in the role of Thor — but that was almost the case! The Australian actor nearly lost the role of the God of Thunder due to participation in Season Five of the Australian version of Dancing with the Stars.

Dancing with the Stars alum and current High School Musical: The Musical: The Series star Derek Hough recently sat down with PopCulture.com and spoke about not only his love of dancing but his love of superhero films and the funny story he recalls hearing about the Marvel star — which is now bringing Hemsworth’s dancing stint back into the spotlight.

Chris Hemsworth did reveal the role that was almost given to someone else in 2017 when he sat down for an interview with BBC. He recalled the conversation that he had with Marvel President, Kevin Feige and what Feige told him.

“Kevin Feige said…”We all saw your audition. We’re passing it around the office, and everyone was really, you know, into it. And then, a few of the girls started googling your name and up came this dancing video, and I thought, ‘Oh no. Thor dancing! The fans are going to eat us alive!'”

In Season Five of Australia’s Dancing with the Stars, Hemsworth was paired with pro dancer Abbey Ross. At that time, the Australian heartthrob was one of the main characters in the popular Australian soap opera Home and Away. The show focused on the lives of the residents of a small coastal town outside of New South Wales called Summer Bay. Hemsworth starred in the show from 2004 until 2007.

The successful soap opera starred a number of other well-known Australian actors in its more than 38 years on television — including Guy Pearce, Naomi Watts, Heath Ledger, and Isla Fisher.

Since his Dancing with the Stars days, it seems that Hemsworth has not given up his love of a good musical number. He is active on Twitter and has shared videos of himself dancing with his adorable family.

What started as a ground breaking music video ended in a savage attack by a cowardly K9. Never work with Kids or Animals. #wreckingball #wreckingdog #daddydaycare #murderonthedancefloor @mileycyrus @liamhemsworth

What started as a ground breaking music video ended in a savage attack by a cowardly K9. Never work with Kids or Animals. #wreckingball #wreckingdog #daddydaycare #murderonthedancefloor @mileycyrus @liamhemsworth pic.twitter.com/1xuNLd3xdQ

Thankfully, we can heave a collective sigh of relief that Kevin Feige and Marvel decided that a dancing blonde Australian would be perfect for the role of the God of Thunder. It is difficult to believe that anyone else would be capable of playing Thor other than Chris Hemsworth.

Hemsworth recently wrapped filming in his newest Marvel movie Thor: Love and Thunder. The film will also star Natalie Portman reprising her role as Jane Foster and Chris Pratt as Peter Quill — meaning the Guardians of the Galaxy will make an appearance! The new movie is scheduled to be released on May 6, 2022.

What do you think of Chris Hemsworth appearing on Dancing with the Stars? Let us know in the comments!

Comments Off on Remember When Chris Hemsworth Almost Wasn’t Thor Because of Dancing?