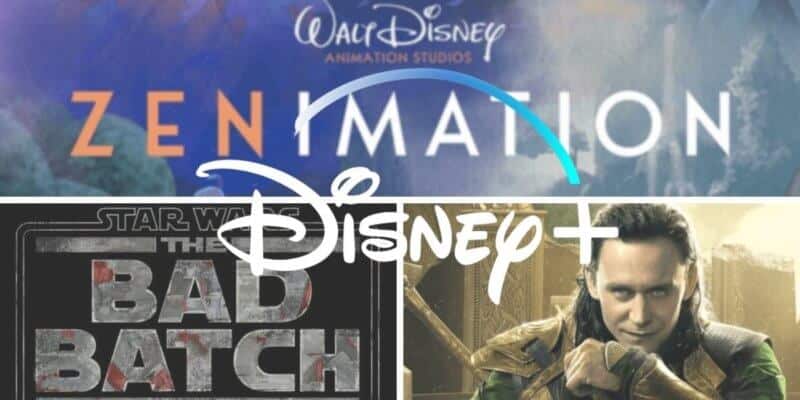 Disney+ is filled with so much content — from classic animated movies like The Lion King to Disney Channel TV shows such as That’s So Raven and, of course, numerous Marvel, National Geographic, and Star Wars titles, including the ever-popular The Mandalorian and WandaVision (both of which are Disney+ Originals).

Here is a complete guide to all of the Disney+ Originals coming to the streaming service in June 2021.

The series debuted on Disney+ on April 16 and new episodes will continue to debut on Fridays in June.

Members of Bad Batch—a unique squad of clones who vary genetically from their brothers in the Clone Army—each possess a singular exceptional skill that makes them extraordinarily effective soldiers and a formidable crew.

The series debuted on Disney+ on May 4 and new episodes will continue to debut on Fridays in June.

Disney+ describes this season as:

The second season of High School Musical: The Musical – The Series debuted on May 14 with new episodes airing throughout the month of June.

Marvel describes this upcoming series as:

As the Marvel Cinematic Universe continues to expand, Marvel Studios: Legends celebrates and codifies what has come before. Revisit the epic heroes, villains and moments from across the MCU in preparation for the highly anticipated stories still to come. Each dynamic segment feeds directly into the upcoming series premiering on Disney+ — setting the stage for future events. Marvel Studios: Legends weaves together the many threads that constitute the unparalleled Marvel Cinematic Universe.

Two episodes of Marvel Studios Legends will drop onto Disney+ on June 4, just a few days before the release of Loki.

Originally set to debut on June 9, Marvel Studios and Disney+ recently released a Loki promo video that showed Loki debuting on Disney+ on Wednesday, June 9! New episodes will air on the streaming service every Wednesday following until the season concludes.

In Marvel Studios’ “Loki”, the mercurial villain Loki (Tom Hiddleston) resumes his role as the God of Mischief in a new series that takes place after the events of “Avengers: Endgame”.

After a successful Season 1, Zenimation Season 2 will premiere on Disney+ on Friday, June 11. The official Disney description:

Unplug, relax and refresh your senses for a moment of midfulness with Walt Disney Animation Studios’ Zenimation. Whether it’s baby Moana being called by the ocean, Anna and Kristoff walking through an icy forest, or Baymax and Hiro flying over San Fransokyo, these iconic scenes become an aural soundscape experience like no other.

Wolfgang Puck is a famous chef who has built a brand from the ground up. He is known for some of the best restaurant hospitality as well as all aspects of the culinary arts. He currently has three companies: Wolfgang Puck Fine Dining Group, Wolfgang Puck Catering, and Wolfgang Puck Worldwide, Inc.

This documentary will show Disney+ subscribers a closer look at the life and work of Wolfgang Puck and will be directed by Supper Club co-found, David Gelb.

Wolfgang arrives on Disney+ on June 25.

After winning a scholarship competition, four gifted orphans are recruited by the peculiar Mr. Benedict for a dangerous mission to save the world from a global crisis known as The Emergency. Reynie, Sticky, Kate, and Constance must infiltrate the mysterious L.I.V.E. Institute to discover the truth behind the crisis. When the headmaster, the sophisticated Dr. Curtain, appears to be behind this worldwide panic, the kids of The Mysterious Benedict Society must devise a plan to defeat him.

The first episode of The Mysterious Benedict Society arrives on Disney+ on June 25. New episodes will release on Fridays after.

If you are looking for a complete guide to everything coming in June, check out our article here.

Make sure you are signed up for Disney’s streaming service, Disney+, so you don’t miss out on any of these Disney+ Originals. You can get started by clicking here.

Which Disney+ Original are you looking forward to? Let us know in the comments below.

Comments Off on Every Disney+ Original Coming In June 2021