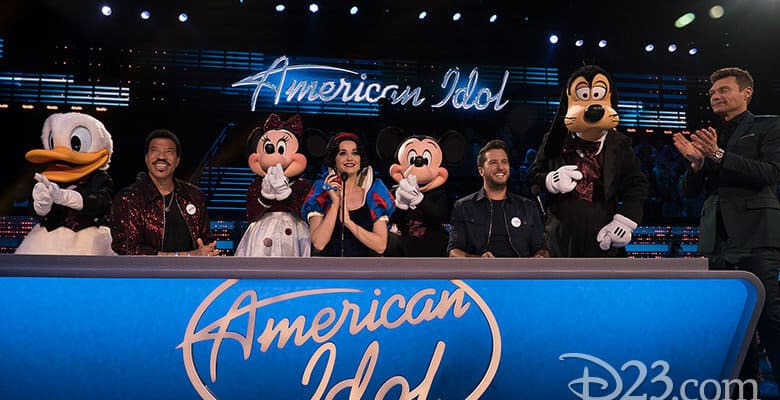 Get ready for some Disney magic because American Idol is bringing back its ever-popular Disney night for the ABC show. And now, fans can get ready to join in the fun because the complete song list has been revealed!

It is shaping up to be a magical night as judges Lionel Richie, Katy Perry, and Luke Bryan will join the contestants and Ryan Seacrest is, of course, hosting. And actor and Disney fan, John Stamos (Full House, Fuller House, Big Shot), will be part of American Idol as a celebrity mentor!

But the best part is we now know the songs that the contestants will be singing on Disney night!

Courtesy of Billboard, fans of American Idol can now prepare for the ultimate Disney night as we know now exactly which songs from which Disney films the contestants will be singing! The song list is as follows:

Though we do not know which contestant will be singing which song until the episode debuts, it is looking to be an incredible and magical night on American Idol.

Disney Parks Blog also recently shared how the top nine contestants found some inspiration at the Most Magical Place on Earth:

The “American Idol” top nine contestants found some inspiration at the Most Magical Place on Earth! Ahead of the show’s ‘Disney Night’ episode airing live on Sunday, May 2 on ABC, the contestants visited Walt Disney World Resort, taking in the theme parks, enjoying favorite snacks, meeting iconic characters, and stocking up on fun merchandise, helping them bring even more magic to the timeless Disney song they’ll sing live on the show.

Not only did Walt Disney World help spark the contestants’ creativity for their ‘Disney Night’ performance, they also had the opportunity to meet one-on-one with celebrity mentor John Stamos, with the stunning backdrop of Cinderella Castle at Magic Kingdom Park. Stamos, whose career has spanned the screen to the stage, has long been a part of the Disney family, and he was thrilled to support the young talent at one of his favorite places to visit. When we caught up with him after the mentor sessions, he said he hopes ‘Disney Night’ on “American Idol” brings both joy and inspiration to viewers.

Be sure to check out the special episode of “American Idol” on Sunday, May 2 at 8 p.m. ET / 6 p.m. MT / 5 p.m. PT on ABC and vote for your favorite contestants. You’ll not only see the contestants enjoying and learning from Walt Disney World, you’ll hear the top nine, plus the Comeback contestant winner, sing some of your favorites from Disney’s storied songbook as “American Idol” moves one step closer to crowning its champion. Be sure to vote in real-time as the top seven finalists will be revealed at the end of the episode!

ABC also brought Disney magic to fans at home during the last year as the ongoing pandemic affected so many. In case you missed it, Ryan Seacrest hosted a handful of Disney Family Singalong specials!

Disney night on American Idol will debut on ABC on May 2 at 8 p.m. EST.

Are you a fan of American Idol? Will you be tuning into the Disney night episode? Let us know in the comments below.