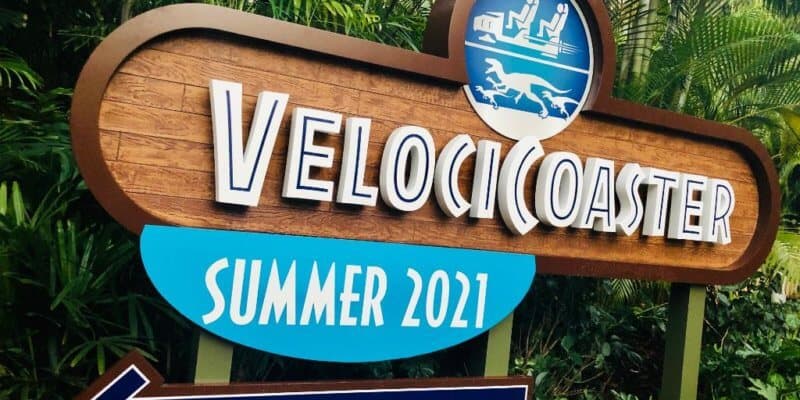 Universal’s Jurassic World VelociCoaster has been the talk among coaster enthusiasts everywhere!

Now that we are starting to see the coaster roar to life with human testing, sound effects in place, and 3-D screens projecting running raptors, the terrifying Jurassic coaster is looking more and more ready each day. With that being said, even though Universal Orlando Resort is continuously hyping up the coaster and releasing a ton of merchandise of the coaster, we still do not have a release date.

At the moment, we know that the coaster will allow Guests to enter the paddocks at some point in summer 2021, but nothing specific. Technically, the actual summer season begins on June 22, however, considering how far along the Jurassic World coaster is, it seems that an earlier date could be chosen. Plus, many Guests may deem that summer begins when the weather starts to really warm up, and by the beginning of June, Orlando is piping hot!

So, this reporter has a theory as to when Universal will announce that VelociCoaster opens, and it has to do with dinosaurs. Something that many of you may not know is that National Dinosaur Day is a biannual holiday celebrated on May 15 and June 1. VelociCoaster is an attraction many Guests are hoping to either soft open to all Guests, or that it will have an Annual Pass preview as they have had for attractions in the past.

Therefore, it would be perfect if those previews took place beginning on the first National Dinosaur Day on May 15, which is just over a month away. And, perhaps the coaster can officially open up just about two weeks later on June 1. The attraction is already so heavily themed to dinosaurs that a themed opening would be perfect!

That being said, if Universal does choose to do a big opening such as this, the parks will likely be hitting their 35% capacity before opening, and it could create a source of chaos. When Hagrid’s Magical Creatures Motorbike Adventure opened at Islands of Adventure, Guests were lining up for what ended up being a 10+ hour wait for many. The line wrapped around the park — and that was two years ago, before the pandemic when Guests could stand a lot closer than six feet apart!

Now, that social distancing is in effect, it would be quite messy to have a queue of such high demand so spread out. Of course, Universal could decide to implement a virtual queue as they have on many attractions, which would help eliminate the lines and chaos and still allow for a grand reveal and big debut of the coaster.

Because of the tough financial year Universal has had due to the ongoing pandemic, and the recent news that Epic Universe would be going back into construction, I think that Universal really does need to wow their crowd, and VelociCoaster is the perfect attraction to do that with — why would they want to stifle it at the opening after promoting it so heavily during construction?

If you want to learn more on VelociCoaster, click here.

That being said, none of this has been said or confirmed by Universal, and is currently just speculation! So Universal, tell us, are we onto something? Does National Dinosaur Day sound like it could be the opening date?

Do you think that this could be Universal’s grand plan to debut Jurassic World VelociCoaster?

Comments Off on When Will VelociCoaster Open? We Have a Theory