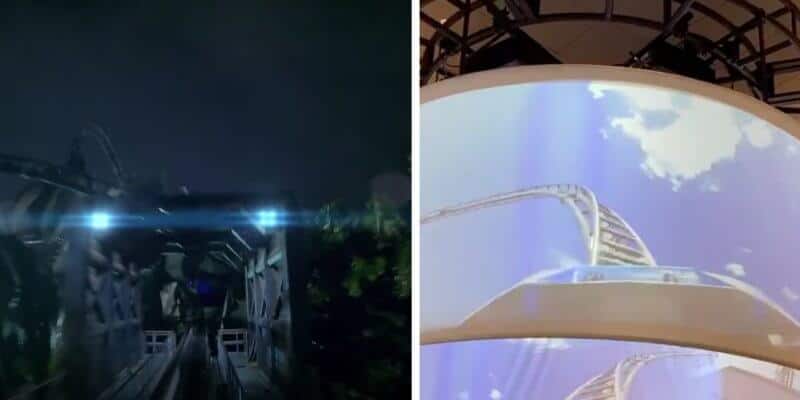 Today marks an exciting event for Universal Studios Orlando as the new Universal Studios Store has officially opened! After months of construction, we can finally enter the massive structure that will allow Guests to shop to their heart’s content before leaving CityWalk at Universal Orlando Resort.

One attraction that is being heavily featured in Jurassic World VelociCoaster. Although not yet open, the new coaster will be roaring to life this summer at Universal’s Islands of Adventure, next to Universal Studios Florida. We can see the exterior windows to the store are covered in VelociCoaster roller coaster merchandise, and the graphics are also showcasing the upcoming Jurassic coaster.

Another thing in the Universal Studios Store that is brand new is the 360-degree projection screen. Now, Guests can look up and see the VelociCoaster promotion on the screen, and make things even better, the footage that Guests can see is never before seen!

Thanks to Orlando Informer (@OrlandoInformer) we can now see that the projection screen features a POV of VelociCoaster. This is the first time that Universal has released a lengthy POV of the new attraction, and seeing it on a big screen allows Guests to feel like they are really riding. Take a look!

VELOCICOASTER (partial) POV: the new Universal Studios Store is giving us our first real-life POV of a ride on Jurassic World VelociCoaster

VELOCICOASTER (partial) POV: the new Universal Studios Store is giving us our first real-life POV of a ride on Jurassic World VelociCoaster. pic.twitter.com/wFbsQoxjA0

Universal has done plenty of filming on VelociCoaster, and in the past, we could see that POV cameras were mounted to the coaster, however, the footage was never released, until now.

We did see a rendered POV of the attraction, and in another, a split second of the first launch, but this new POV is much longer and showcases what the 155-foot drop off the top hat of the attraction will look like, and our stomach is already dropping just watching the footage!

It will be exciting to see if this POV is soon revealed on YouTube, or if it will live exclusively at the Universal Studios Store. Considering how anticipated the coaster is, keeping at the new store is a great marketing tactic as many coaster enthusiasts will likely flock to the store to view the POV for themselves.

If you want to learn more on VelociCoaster, click here.

What do you think of this new POV of Jurassic World’s VelociCoaster?