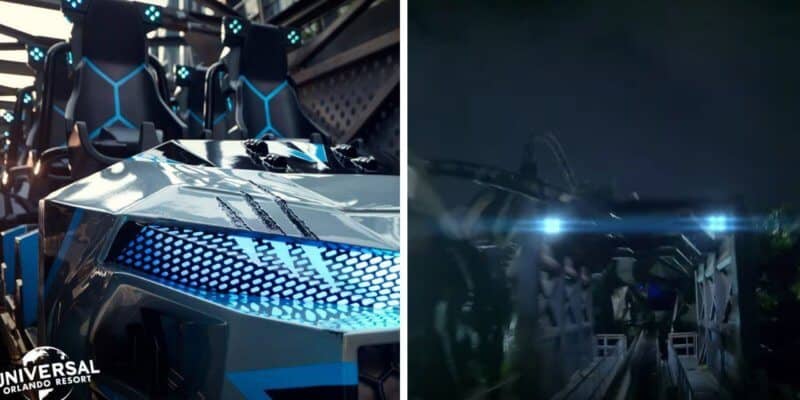 With thrill fans and Jurassic World lovers patiently awaiting Universal’s Islands of Adventure to unleash VelociCoaster, watching footage of the ride has been the next best thing to actually riding it.

There has been constant daytime testing, and lots of videos that are being produced of that footage, but due to the raptor enclosure, and the surrounding ride elements, watching a full VelociCoaster ride through in one shot has yet to happen.

That being said, it looks like Universal is gearing up to release a VelociCoaster POV video of the full ride. The Orlando Perspective (@OrlPerspective) tweeted a photo of the VelociCoaster running its track — but noticed an additional rider in the form of a GoPro.

While editing my video I noticed a GoPro on the front seat restraint near the headrest. Hopefully a POV soon.

While editing my video I noticed a GoPro on the front seat restraint near the headrest. Hopefully a POV soon. @AmusementInside @AliciaStella pic.twitter.com/5GN9o0rxVH

In the photo, you can clearly see a GoPro is securely fastened to the front seat of the ride vehicle. Universal recently released a trailer showcasing the attraction truly for the first time, and in that video, we did see a moment of POV. It may be, depending on when The Orlando Perspective shot their video to capture this still frame, that this GoPro was mounted for the experience.

However, whether or not the VelociCoaster POV was filmed before or after the video release, knowing that Universal has a full ride through on hand is definitely getting riders excited to possibly see more of the attraction.

VelociCoaster sets the riders up in a high speed run with velociraptors, including lots of animatronics and intense thrills. But the important thing to note here is that you are one with the dinosaurs. This means the track should, in theory, mimic the way a velociraptor would move, which is something the POV could definitely bring to light.

At the moment Universal has not released any more information as to a VelociCoaster POV, and considering rides are not allowed to be filmed at Universal, releasing a full rider experience video of their most anticipated attraction doesn’t seem likely, but I do think we may end up seeing more POV shots in the future.

For now, fans can get excited thanks to the recently released information here:

Jurassic World VelociCoaster will raise the bar in extreme roller coaster design and become the ultimate experience for thrill-seekers – catapulting guests up to 70 mph and more than 150 feet in the air as they feel the rush of the hunt alongside a swift pack of Velociraptors.

Designed for speed and engineered for the hunt, the coaster’s revolutionary ride vehicle will send riders twisting and soaring across 4,700 feet of track as they encounter near-misses, launches, 12 heart-pounding seconds of airtime and more – with just a lap bar restraint holding them in place.

Do you think Universal will release a VelociCoaster POV?