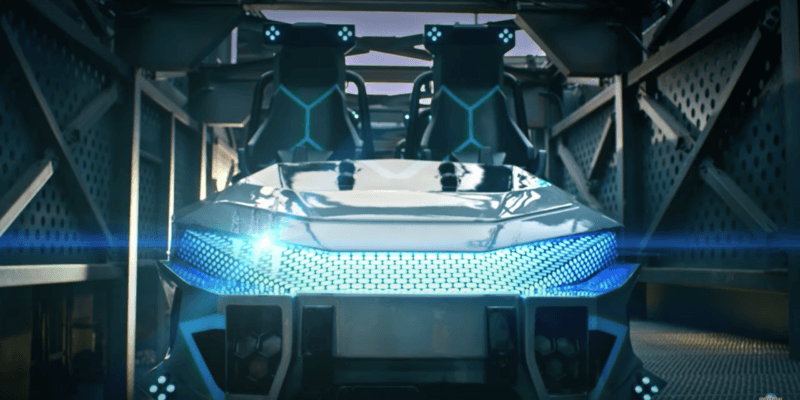 “Hold onto your butts!”

Universal Orlando Resort just released a new look at its highly-anticipated new ride, the VelociCoaster, highlighting a new look at the ride vehicles.

Jurassic World VelociCoaster will raise the bar in extreme roller coaster design and become the ultimate experience for thrill-seekers – catapulting guests up to 70 mph and more than 150 feet in the air as they feel the rush of the hunt alongside a swift pack of Velociraptors.

Designed for speed and engineered for the hunt, the coaster’s revolutionary ride vehicle will send riders twisting and soaring across 4,700 feet of track as they encounter near-misses, launches, 12 heart-pounding seconds of airtime and more – with just a lap bar restraint holding them in place.

This video comes out only a day after we reported that filming was underway at the coaster in Universal’s Islands of Adventure theme park. And while the filming and this video release are most likely not connected, they are both signs of proof that Universal is not shying away from building the hype for its new attraction.

These ride vehicles have also already been seen in action, somewhat, as video captured by onlookers showed Universal testing the ride vehicle through the entire course of the track. Click the link below to watch for yourself and read our coverage.

But the track and ride vehicles are not the only aspects turning heads. The VelociCoaster will also feature some impressively terrifying dinosaur animatronics placed throughout. We first reported seeing some air-lifted into the attraction and then shared a look behind the scenes posted to Twitter by Lewis Lee (@Jurassic_korea).

Universal Orlando Resort’s VelociCoaster is set to be unleashed in the Summer of 2021. Remember to subscribe and stay tuned to Inside the Magic as we continue to bring you the latest information surrounding this roller coaster.

If you want to be one of the first to take on the VelociCoaster, our friends at Academy Travel are standing by ready to help you plan your trip! Click here to get started!

Are you excited about the VelociCoaster? Let us know in the comments!