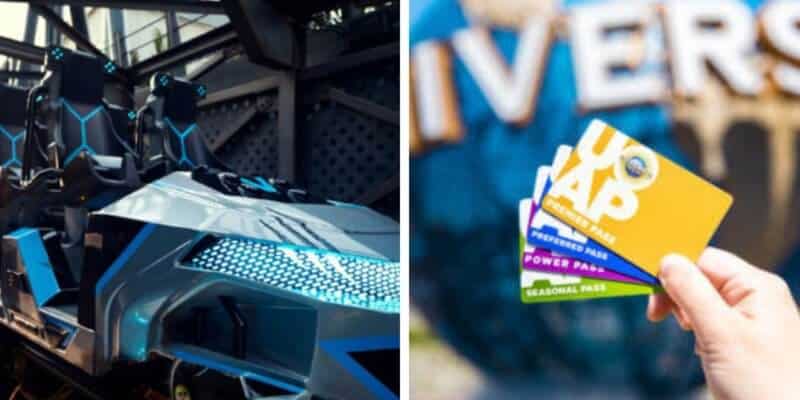 VelociCoaster is going to be unleashed this summer 2021 at Universal Orlando Resort, and guests cannot wait to ride! Considering this is going to be Florida’s fastest launch coaster with moments of g-force, the intense thrill mixed with the detailed Jurassic World theming is setting this attraction to be a must-ride. With Universal catering to a lot of the hype around the coaster as we approach its opening, Annual Passholders are wondering if they will be the first to ride.

Before we discuss ride previews, let it be known that Universal Orlando Resort has yet to announced when VelociCoaster will specifically be opening. As we mentioned, summer 2021 is the only provided time frame at this point. That being said, in a recent interview with VelociCoaster’s creative team, Universal mentioned that the ride’s opening date was only a few months away and a big announcement was coming soon. Considering the extreme progress that we see almost daily on this coaster, it would not be too shocking to hear that VelociCoaster will open sooner rather than later.

So, will Universal Annual Passholders be the first to ride? Universal Orlando Resort’s Twitter account is very active and often responds to guest inquiries when they arise. Kell Bell (@travellingmom827) took to Twitter to ask if there would be Annual Passholder previews for VelociCoaster.

Hello! Please keep an eye out on our website and/or social media channels for any updates or announcements. Thank you!

The response is their typical answer that is sent to guests who ask when the coaster will open, and may not seem very significant due to that. However, from this, we can see that Universal did not say no to the idea, and therefore, Annual Pass previews are in the realm of possibilities for VelociCoaster.

It would not be out of the norm to see Universal host an Annual Passholer preview for the ride considering this is something they have done in the past. Attractions such as Transformers: The Ride 3D received AP previews before opening, and considering VelociCoaster has already moved onto human testing, it seems that guests are moments away from being able to ride.

Annual Pass previews would also be a great marketing tactic for Universal. Universal is currently struggling financially due to the pandemic and just broke even in its theme park division for 2020. They are trying to drive business so much so that Annual Passes are being sold to last for 15 months for the price of 12 months –– and that price is less than half of a Disney World Annual Pass, even at the highest tier. Considering the demand for VelociCoaster is so huge, offering a chance for guests to ride it first could be the nudge some need to commit to becoming a UOAP.

Plus, Universal, remember when you Tweeted that you loved your Passholders? This would be a great way to show it!

For now, stay tuned to Inside the Magic as we continue to track everything that is going on with VelociCoaster!

Do you think that Universal will have an Annual Pass preview for VelociCoaster?

Comments Off on Will VelociCoaster Have AP Previews? Universal Responds