Universal's VelociCoaster Raptors Have Been Unleashed! - Inside the Magic 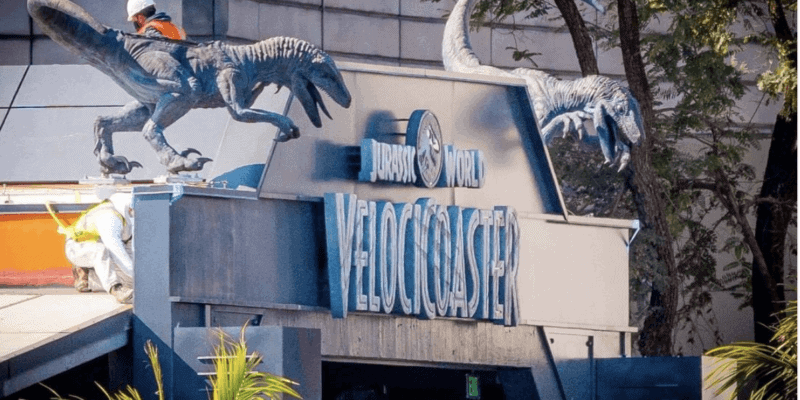 As Universal Orlando Resort’s biggest attraction of 2021 rolls towards its grand opening in summer 2021, VelociCoaster is continuously revealing more and more of the attraction. Universal thrill-seekers have not been this excited since Hagrids Motorbike Adventure opened in the Wizarding World of Harry Potter — and VelociCoaster will have that attraction beat when it comes to speed and stomach-dropping sequences.

The Jurassic World IP coaster that is finding a home at Universal’s Islands of Adventure will have riders join the dinosaurs in the paddocks for a velociraptor run. Much like in the film, the raptor enclosures are a very dangerous space, where the carnivorous dinosaurs are ready to rip apart Owen Grady (Chris Pratt) any chance they get! This time, it is us that get to step into a prehistoric world and risk our lives for some adventure!

VelociCoaster is holding nothing back when it comes to instilling fear into its riders. Not only is the entire coaster enclosed in a high-level security paddock, but the rockwork looks terrifyingly jagged and dangerous. To add to that, there are dinosaurs… everywhere.

We recently reported that the marquee entrance for VelociCoaster was just about ready to go with the signage in place. Now, that entrance is the feared threshold that this coaster calls for as the raptors have been unwrapped!

Orlando Informer (@orlandoinformer) has posted the Jurassic World VelociCoaster entrance to Instagram, and those raptors look scary. Positioned perfectly as if they are ready to jump on guests as they enter the attraction, I personally will be scurrying past this section when I can hop on the roller coaster. When a raptor has their tongue out like that… it is never good news.

From this photo, we can also see that the Universal creative team is still working on the final touches for the coaster. Luckily, it is only final touches that are being added at this point. VelociCoaster has already undergone human testing and is constantly being run on its tracks. Universal has not specified an opening date aside from summer 2021, but they have noted that a big announcement is coming soon. Considering the progress this coaster has had, it would not be surprising to hear that Universal is ready to unleash the beast sooner rather than later.

For now, stay tuned to Inside the Magic as we continue to cover everything VelociCoaster!

Are you hyped to ride VelociCoaster? Do you think this attraction will be as thrilling as its exterior presents?

Comments Off on Universal’s VelociCoaster Raptors Have Been Unleashed!