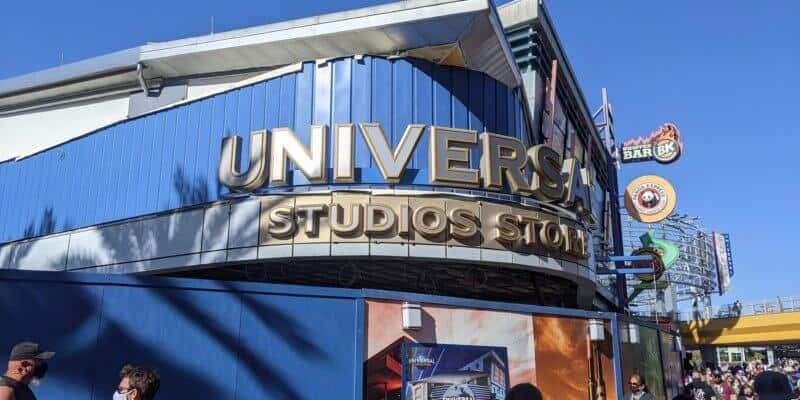 Fans of Universal Orlando Resort can now rejoice as the brand new CityWalk Universal Studios Store takes another leap towards opening its doors!

Related: Is Universal Studios Hollywood Reopening for Shopping and Dining?

For those who don’t know, the main Universal Orlando store is going to be moving to a bigger location in Universal CityWalk. Construction on the building has been in place for quite some time at this point, but now, it seems that things are speeding up. Most recently we have been able to see that the store’s signage has been put up, making the exterior come to life.

The interesting thing about this storefront is that we are not sure exactly where the main entrance is! When we went to CityWalk, we could see that there are currently three signs for the Universal Studios Store on different sides of the building. Check out all the signs below.

If this tells us anything, it is that the Universal Studios Store is about to get a huge upgrade in terms of space. At the moment, the current store is quite crowded with Guests, and it is difficult to navigate. This new store should correct that problem, considering it is much more sprawling.

Recently, we reported that the Universal Studios Store concept art was giving fans a small Super Nintendo World Easter egg. In one of the windows, Guests could faintly see that one display case had Mario and Luigi inside of it. Shortly after that concept art was revealed, Universal revealed that construction was once again beginning at Epic Universe.

Considering Super Nintendo World is the only confirmed land in Epic Universe, it seemed that Universal was giving fans a small tease for the news ahead!

It also seems quite clear from that rendering that, although Epic Universe will not be located directly next to Universal Studios Florida and Islands of Adventure, the theme park’s merchandise will still seemingly be sold at the official Universal Studios Store in CityWalk. That being said, Epic Universe will also get its very own shopping, eatery, and hotel section, which will likely feature a merchandise shop for Guests at the park.

For all the up-to-date information on Epic Universe, click here.

For now, we are excited to see what is to come with the brand new Universal Studios Store in CityWalk!

Are you glad Universal has a new store? Or do you think its current option is fine as is?

If you want to visit Central Florida, why not book a Universal vacation? You can head to the theme parks, Halloween Horror Nights (HHN), Volcano Bay, Mardi Gras, the Tribute Store, the Wizarding World of Harry Potter, and so much more! Click here to begin booking today!

Comments Off on Universal’s New CityWalk Store Will Be Massive