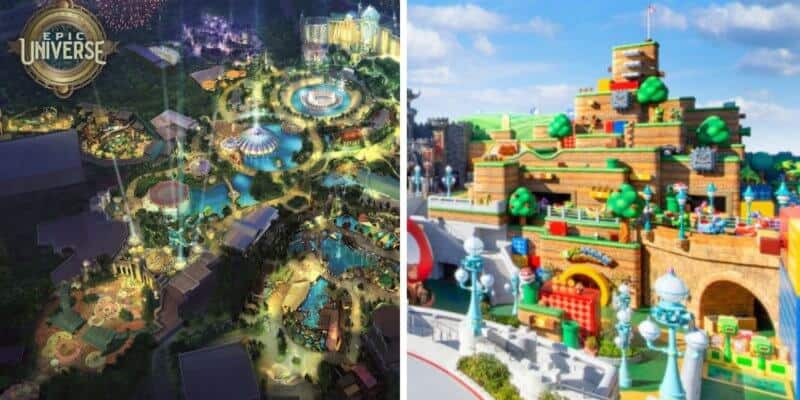 Super Nintendo World is the latest land created at Universal Studios Japan, with confirmed plans to come to Universal Orlando Resort. Lately, it has seemed that Super Nintendo World’s debut in Orlando was a distant dream, but now, it looks like Universal may bring Mario and Luigi to Florida sooner than expected!

Super Nintendo World was confirmed to be one of the lands that will appear at Universal’s Epic Universe theme park, which will serve as the third gate at Universal Orlando Resort, adding to Universal Studios, Islands of Adventure, as well as CityWalk and Volcano Bay! That being said, Epic Universe currently looks like a ghost town and construction has been paused indefinitely. Because of this, many Universal fans, including myself, became skeptical regarding Epic Universe’s existence and if it would ever come to completion. Universal has announced, however, that it will be built “at some point”, which still did not sound too promising.

Now, there is a new Nintendo development, which is definitely serving as a beacon of hope that Epic Universe will be built, and that Super Nintendo World will be available to Guests! ThrillGeek (@thrillgeek) recently took to Twitter to showcase the new Universal Studios Store that is currently under construction at Universal CityWalk. As the video enhances the photo, we can see that Mario and Luigi are in the window.

At the moment, Universal has no Nintendo IP in their Orlando parks. If the new Universal Studios Store is going to be advertising Nintendo, it is likely because they will have it in their parks. It is interesting that Universal decided to hide this little Easter egg in the photo, as it strongly emphasizes Nintendo — and shows nothing about major current IPs in the park, such as Harry Potter. It seems that Universal is making it quite clear that Nintendo will be an IP used in the Florida theme parks.

Stay tuned to Inside the Magic as we continue to track all things Universal!

Do you think that Epic Universe will be built in the near future? How do you like Universal Japan’s Super Nintendo World?

If you want to visit Universal Studios, Universal’s Islands of Adventure, Volcano Bay, or CityWalk — you need a Universal Orlando Resort Vacation! From Halloween Horror Nights to Mardi Gras there is always something fun to do at Universal Florida. A trip to Central Florida mixed with some fun at Universal Studios Florida will definitely get you in the theme park spirit. Click here to get started today.