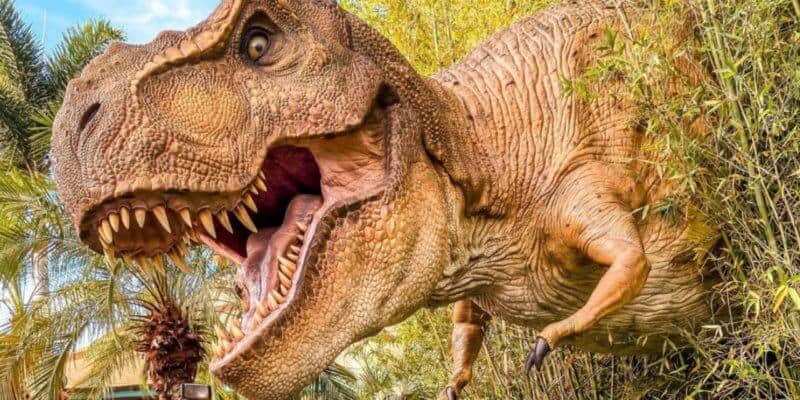 Universal Orlando Resort has some pretty amazing photo spots that use props from a variety of films to give Guests unique picture opportunities that really scream, “Universal”, when they visit the theme parks.

From Doc Brown’s DeLorean from Back to the Future to the giant Jaws statue that menacingly hangs upside down for Guests to stick their head in and get the perfect shark attack photo (unfortunately, that photo op is currently closed amid the pandemic), to E.T. all dressed up in a closet, there are so many Universal classic photo opportunities that Guests can take advantage of.

Now, Jurassic Park fans can rejoice because the original Jurassic Park photo op spot has returned! Yesterday, we reported that construction walls were surrounding a giant dino at Islands of Adventure by Thunder Falls Terrace where the original T-Rex photo op used to be, but it ended up being moved to the area around Burger Diggs.

Universal Orlando Resort (@Universalorlando) has now shared a photo of the fully unveiled photo op, which looks even more terrifying than the other dinosaur that pops out at Guests near Burger Diggs.

A return 65 million years in the making.

The dinosaur still has the Jurassic Park Jeep in front of it, making it the perfect spot for Guests to snap a photo and tell their friends they went to Isla Nublar! It is also great to see that now, around many corners of Jurassic Park, Guests have the opportunity to run into a giant dinosaur, just like the characters in both Jurassic World and Jurassic Park experience in the films. Other good photo op spots include Raptor Encounter and the dinosaur by Burger Diggs.

Would you want to take a photo with a T-Rex at Universal Orlando Resort?