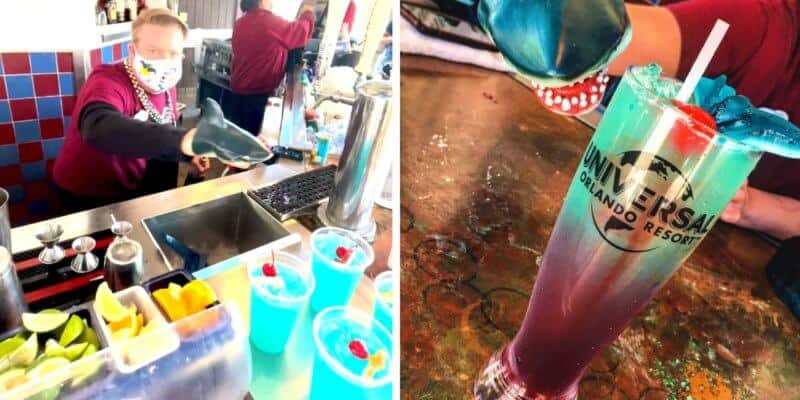 Going to theme parks, Guests often want to experience something special and unique to the theme park they are visiting.

Universal has many of these experiences for its Guests, one of them is perfect for any fans of the classic shark thriller movie, Jaws.

Universal Orlando Resort offers many individual experiences to their Guests, but some are more well known than others. There is one specific drink that will give classic Universal movie buffs, and Jaws fans a surprisingly terrifying and yet highly satisfying experience, including a performance by the bartender.

Related: Universal Has Reopened All Of Their Theme Parks, Except One…

If you are visiting Universal Orlando Resort and you are over the age of 21, one of the coolest drinks you can order is the Ocean Attack at Chez Alcatraz. This drink is not brand-new, but the experience that it entails is not highly publicized either, which means not enough Guests know that there is a hidden surprise at this outdoor bar.

Universal Studios Drink "The Ocean Attack" Can't Be Beat. Universal Is Where It's At!!! I Love Shark Week!!! #UniversalStudios #SharkWeek #ChezAlcatraz #UniversalMoments pic.twitter.com/YtBGYlExDE

Aside from looking exactly like the movie poster, the best part of ordering this drink is watching it be made. Once the Grenadine needs to be added in the bartender will put on a shark puppet and do an entire skit where he or she will drip the red liquid in the blue drink to create a blood spilling effect, just like the film.

If you want a full video, take a look at YouTuber Mary deSilva-CajunDIYDiva’s experience.

Here are a few photos from our experience trying out the drink, and we agree, the performance truly brings the cocktail to an entirely new level!

Considering that the Jaws attraction at Universal Studios Florida has been removed, it is nice to still have remnants of the film in the park, such as this drink.

Would you order the Ocean Attack drink from Universal Orlando Resort?

If you want to order one of these, you need to come to Universal Orlando Resort! Enjoy Universal’s Islands of Adventure, Universal Studios, CityWalk, Volcano Bay, Halloween Horror Nights, Mardi Gras, and all of the other fun offerings on your visit. Click here to book today.