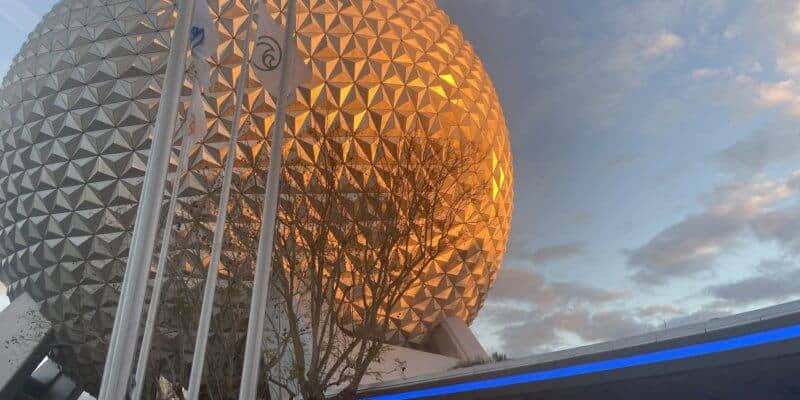 Well, this is something no one will be thanking the Phoenicians for. Today at EPCOT, Spaceship Earth, the giant geodesic sphere at the theme park’s entrance, broke down and Guests had to be evacuated.

The breakdown and evacuation were shared this evening on Instagram by Ben Taylor (@bentaylor).

What it’s like when Spaceship Earth breaks down.
#spaceshipearth #epcot

In the photos, it can be seen that the lights had been turned on and Cast Members are directing Guests to safety While Cast Members will always try to get the ride back up and running, sometimes that cannot be done very quickly, whether that is due to technical difficulties or other unforeseen circumstances. In those instances, Disney Cast Members assist Guests off the ride as efficiently as they are able to.

According to WDW Stats, the ride was down for almost an hour.

Spaceship Earth has been reopened after an interruption of 56 minutes. http://wdwst.at/detail/80010191

Spaceship Earth has been reopened after an interruption of 56 minutes. https://t.co/BoydI4YOIH #Epcot #WDW #WaltDisneyWorld #DisneyWorld

Eventually, the attraction was back up and running, and later on in the evening it had a 20-minute wait:

Although the Walt Disney World Resort is the Most Magical Place on Earth, there are situations in which attractions need to be evacuated. This is not the only time recently that Disney has had to evacuate Guests on rides at their Florida theme parks. Just last month, Guests had to be evacuated off of the Seven Dwarfs Mine Train in the Magic Kingdom.

EPCOT is currently undergoing some major improvements, enhancements, and construction. It is getting a complete makeover in preparation for Disney World’s 50th anniversary. Spaceship Earth itself is one of the locations getting an upgrade. A complete attraction refurbishment was originally scheduled to occur, but that has been delayed for the time being. However, the outside appearance of the attraction will be enhanced in numerous ways.

According to Imagineer Zach Riddley, new, enhanced lighting is going to be added to the Spaceship Earth exterior. Riddley said:

“And speaking of night, to complement the design of world celebration out ream are beginning work on an enhanced lighting package coming to the exterior of Spaceship Earth that will activate this area of the park like never before. This lighting design will allow us to create custom programming that connects this icon of EPCOT to its surroundings and perfectly encapsulates the parks transformation. Again, taking this symbol of optimism and hope and collaboration across culture and time and really creating a unique evening moment that again will make EPCOT such a defining feature at night.”

EPCOT will not only have a new look when Guests go for the 50th anniversary, but it will also have a brand-new attraction, Remy’s Ratatouille Adventure. The ride is a close replica of the incredibly popular attraction found in Walt Disney Studios Park at Disneyland Paris. Remy’s Ratatouille Adventure will be found in the newly expanded France Pavilion of the World Showcase. It will open on October 1, 2021, the 50th anniversary of Walt Disney World.

Are you a Spaceship Earth fan? Let us know in the comments!

CLICK HERE to get started booking your Disney getaway with our friends at Academy Travel!