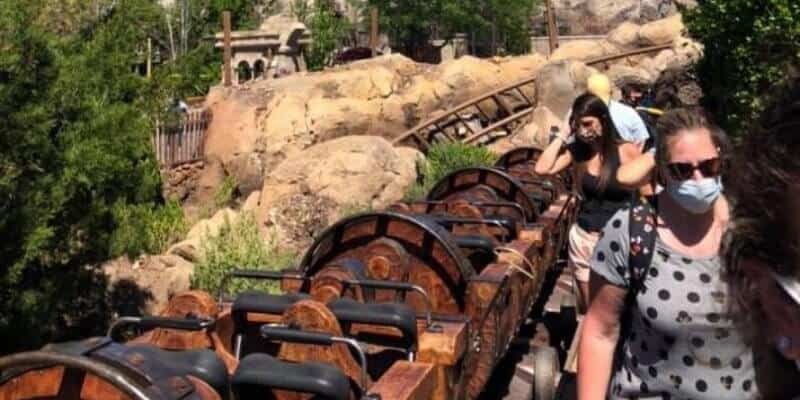 Disney Parks attractions can experience technical difficulties from time to time, and it looks as though this week has been a tough one for the Most Magical Place on Earth.

Now, it looks like another Magic Kingdom attraction had to face some downtime earlier today as Seven Dwarfs Mine Train evacuated Guests from the attraction this afternoon.

Seven Dwarfs Mine Train is one of the most popular attractions at Magic Kingdom at Walt Disney World. It typically has one of the longest — if not the longest— wait times at the theme park every single day. Well, unfortunately for some Guests, they had to be evacuated off of the attraction this afternoon as the ride experienced some technical difficulties, however the Cast Members who were working at the time were extremely helpful and reassuring to Guests.

Disney World Guest Kara W. shared online that she was evacuated off of Seven Dwarfs Mine Train after being stopped at Snow White’s cottage at the end of the ride. Kara and the rest of her party had to be escorted off and went through the emergency exit, which you can see in the photos below.

Kara explained that all of the Cast Members were extremely professional and helpful through this process, especially when navigating the Guests through getting off of the ride vehicle and to the emergency walkway. Every Disney World Cast Member ensured Guests that they were safe and really helped them through the evacuation process, which was very reassuring to those who were walking off of the ride, Kara said.

Kara also took to Twitter to share her experience, in which again she reiterated how helpful the Disney World Cast Members were during this experience.

I had a nearly unbelievable excuse for being late to a conference call today: I was stuck on the @WaltDisneyWorld Seven Dwarves Mine Train ride and in the process of being evacuated off of it! Cast members were great, though! ?? #DisneyWorld #disneymagic #castcompliment

I had a nearly unbelievable excuse for being late to a conference call today: I was stuck on the @WaltDisneyWorld Seven Dwarves Mine Train ride and in the process of being evacuated off of it! Cast members were great, though! ?? #DisneyWorld #disneymagic #castcompliment pic.twitter.com/qhf9FTXWVT

At this time, it looks as though Seven Dwarfs Mine Train is back up and running at Magic Kingdom. According to WDW Stats on Twitter, the popular attraction reopened after an interruption of 87 minutes.

Seven Dwarfs Mine Train has been reopened after an interruption of 87 minutes. https://t.co/9vAJ3zWpj7 #MagicKingdom #WDW #WaltDisneyWorld #DisneyWorld

At the time of publication, Seven Dwarfs Mine Train is showing a 65-minute wait time, which you can see reflected in the screenshot below.

Have you ever been evacuated off of an attraction at Disney World? Let us know in the comments below.

If you want to visit Disney World on your next family vacation, get started here.