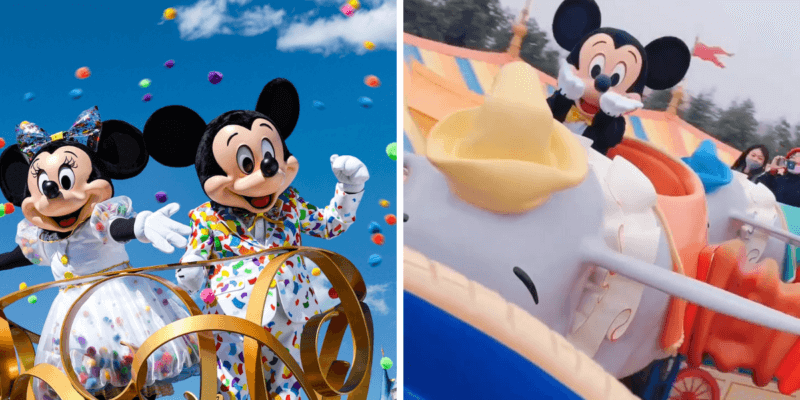 This is something right out of a Disney Parks commercial — Mickey Mouse, the big cheese himself, was filmed riding Dumbo with Guests!

This adorable video of Mickey experiencing Dumbo the Flying Elephant was taken in the Gardens of Imagination area at Shanghai Disneyland and captures the true magic of a Disney theme park.

When Disney Parks began to reopen after closures caused by the ongoing pandemic, character experiences were greatly altered. Guests can see characters from afar and take socially distanced selfies.

Thanks to Twitter user and Shanghai Disneyland fan @gourmetdyy we see a fantastic video of Mickey Mouse riding Dumbo with Guests! This is not something we have seen in any stateside park since they reopened, but we can confirm that this does happen sporadically at international Disney Parks such as Tokyo Disney Resort, Hong Kong Disneyland, and Shanghai Disneyland.

At Walt Disney World currently, the characters are appearing in special cavalcades, which are like mini-parades that often happen throughout the day at Magic Kingdom, EPCOT, Disney’s Animal Kingdom, and Disney’s Hollywood Studios.

We have also seen characters such as Anna and Elsa, Winnie the Pooh, and Joy make appearances at EPCOT, as well as the Disney Princesses, Mickey, and Minnie, appearing to wave at Guests in Magic Kingdom.

Over at Disneyland during the A Touch of Disney event, we have also seen some awesome character interactions, including Max and Goofy fishing!

We love seeing the characters out and about at the parks, despite that it is not yet safe for us to go up and hug them as the parks have been operating amid the ongoing pandemic.

Mickey riding the Dumbo the Flying Elephant attraction is amazing, and we hope that more characters can ride attractions with Guests in the future. What a great way to see your favorite character and snap a cute picture while still staying safe.

Would you like to see more characters ride attractions with Guests? Let us know in the comments!

We can help you plan the perfect Disney vacation — click here for more information.