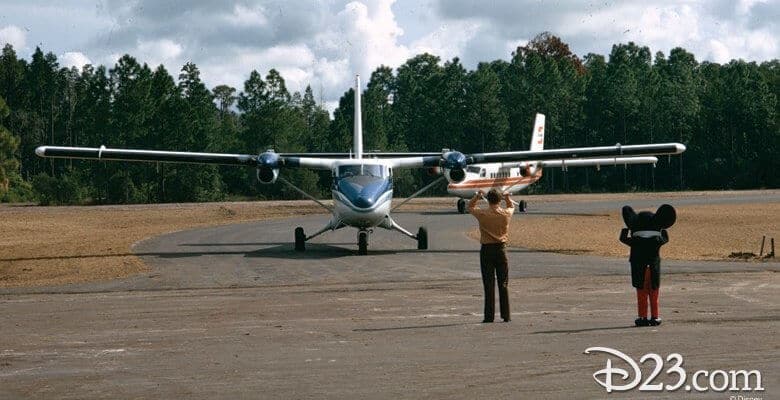 When you think of the word “abandoned”, oftentimes, you likely do not think “Disney”. That being said, there have been many abandoned things on Disney property for quite a while.

From River Country, Disney’s abandoned water park of 15+ years, to half of Disney’s Pop Century Resort (which was abandoned until Disney’s Art of Animation was built), Disney has a past of building something, and subsequently leaving it until they figure out what else to put in that spot.

Well, it seems that we can now add “airport” to the list, as there was a runway that ended up collecting dust for years until it was converted into a back road used for Cast Members to use for transporting various items.

Thanks to The Mouselets (@themouselets) on TikTok, we can take a look at the abandoned history of this wannabe airport!

So, when Walt wanted to create the original EPCOT — a community, not a theme park — he wanted it to have a regional airport with four runways. That idea never came to fruition, however, and Lake Buena Vista Airport was built in 1971 to serve as a “STOL” airfield for Walt Disney World Guests and employees, right next to Magic Kingdom!

There were only two airlines that used the shortened runway, but by the 1980s the dream of having an airport on Disney World property once again began to die. With the construction of the monorail on either side of the airport, it became dangerous to use the runway, so no more flights were allowed in or out. Then by 2003, Disney World was declared a no-fly zone, so the runway officially had no use.

Over time, the runway was converted to a roadway, but sat purposeless for years before any construction occurred. The demise of the airport is quite sad, however, because landing your plane on Disney property would have been magical for two reasons.

Imagine landing to classic Disney music and then heading to Magic Kingdom and looking at Cinderella Castle, which, by the way, you just saw an aerial view of? Doesn’t that sound like the perfect start to a Disney vacation?

I mean, Disney’s solution to the Magical Express ending would have — at least in theory — been very easy if they did have a fully functioning airport, but alas, that will likely never happen again due to the restrictions and size needed on the property.

Would you prefer for Disney World to have an airport? Would you pay more to use it?