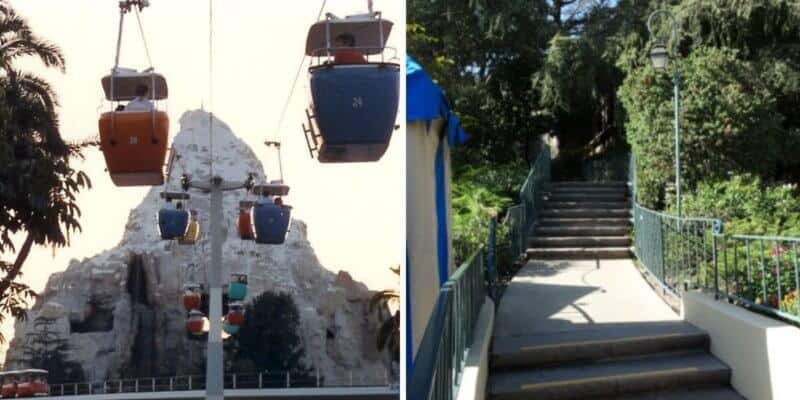 For Disney fanatics such as myself, finding out about a new piece of Disney history is often exciting, but finding out that an abandoned attraction still exists in its abandoned form — well, that’s an adrenaline rush.

Aside from Walt Disney World’s infamous waterpark, River Country, which stood abandoned from 2003 – 2019, not many lands or attractions that Disney shuts down have the opportunity to naturally decay and remain untouched — considering that it would not fit with the various theme parks’ aesthetic. In the case of River Country, the waterpark was quite hidden and only slightly visible to Guests who, when visiting Fort Wilderness Campground, would have to walk down a long path only to come upon a fence that ultimately blocked the view of the decaying park.

Now, it seems that there is a structure that was created 67 years ago at Disneyland that has been left abandoned for the past 27 years.

Disney’s Skyway was a gondola lift attraction that previously found its home at Disneyland Resort. Having opened in 1956, the attraction was a quick addition to the newly built theme park, which opened its gates for the first time on July 17, 1955. The attraction both provided a colorful overhead view for Guests looking from the ground and gave riders a fun birds-eye view of Walt Disney’s original theme park property.

The attraction would transport Guests from Tomorrowland to Fantasyland (and vice-versa), all the while traveling through the Matterhorn Bobsleds, once it was constructed in 1959. As one may imagine, when the attraction opened, it was not a highlight of the park, considering it was merely a mode of transport across Disneyland. Back when Disneyland accepted tickets for attractions, the Skyway was considered a ‘D-ticket attraction’.

Famous Imagineer and transport guru Bob Gurr had a hand in the Disneyland Skyway. The bucket seats, which could only hold two Guests, were upgraded to a rectangle-shaped gondola that would fit four Guests at a time in 1965. For an extensive and financially taxing upgrade — like replacing every ride vehicle — to happen, would have meant that the attraction was popular enough at the time to incite the change.

In 1994, the Skyliner transported its final Guests and was shut down.

If you are wondering why this happened — there are a couple of possible scenarios. The official answer is that the popularity of the attraction began to dwindle and space was needed for Indiana Jones Adventure: Temple of the Forbidden Eye, which would open a year later in 1995.

However, it was also noted that the Matterhorn Bobsleds attraction needed repairs (it was cracking) in order to keep the Skyway safely running. Doing the repairs would have been financially draining and if the attraction was lessening in popularity, the cost may not have been worth the payoff.

The attraction which took over 150 million Guests across Disneyland was partially demolished in 1994 when the Tomorrowland loading dock was taken down. However, the chalet in Fantasyland was not removed at that time.

It was not until August 15, 2015, when Bob Iger, then-CEO/current executive chairman, of The Walt Disney Company, announced the 14-acre Star Wars: Galaxy’s Edge expansion, that plans were made to remove the Fantasyland Skyway chalet. Until then, the chalet simply lay abandoned.

The building was removed in 2016 while work for Galaxy’s Edge was underway. However, it was not until the construction walls came down that it was realized not all of the Skyway’s past had been removed. Behind a vendor in Fantasyland lies a decaying and abandoned staircase that once lead up to the loading dock of the Skyway.

Through Google Maps street view mode, we can see that the thin green painted rails have been bent, and greenery has overgrown the stairway as well as the path that leads behind it. Interestingly enough, if one was still able to take those stairs, it would still lead to transportation — except now you’re transported to a galaxy far, far away.

Today, we can still see influences of the Skyway (which was also once present at Magic Kingdom and Tokyo Disneyland) through the Disney Skyliner. Although it is now more technologically advanced, the Disney Skyliner is a gondola system that serves the same purpose as the Skyway. At Disney World, the gondola system connects EPCOT, Disney’s Hollywood Studios, Disney’s Riviera Resort, Disney’s Caribbean Beach Resort, Disney’s Pop Century Resort, and Disney’s Art of Animation Resort (a Disney Resort which was actually the abandoned second half of Pop Century before its inception.)

What is your favorite abandoned Disney attraction or land? Do you wish the Skyway was still operating? Let us know below!