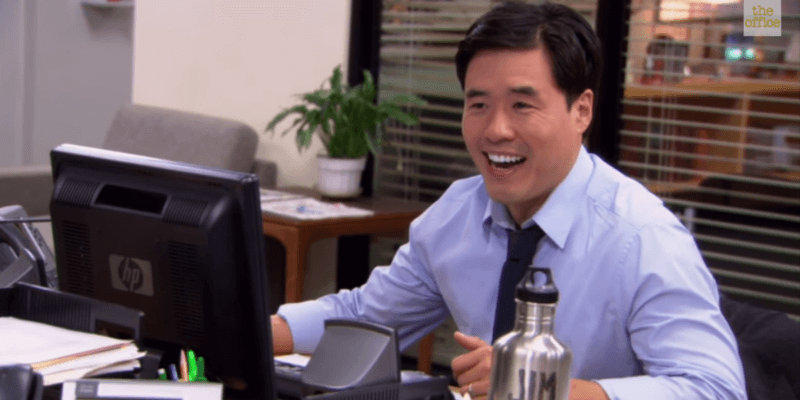 Jimmy Woo has become a legend amongst Marvel fans and won’t be forgotten anytime soon — there’s even a dark horse movement for the fan fave to get his very own show. Amid the popularity of his most recent character, the Marvel star recently revealed that he’d forgotten another famous role from The Office — “Asian Jim.”

Related: How ‘WandaVision’ Could Feature Two Jim Halperts From ‘The Office’

WandaVision came to a dramatic close last Friday, and every Marvel fan is asking for more of the comedian’s Woo, Kat Dennings’s Darcy Lewis, and Teyonah Parris’ Monica Rambeau (and Ralph Bohner!). They’ve all become stars in their own rights, but Jimmy Woo is taking the Marvel Cinematic Universe by storm. There’s even a hashtag on TikTok called #woobackwednesdays where fans highlight his various roles in numerous TV shows and films.

Undoubtedly one of the most popular “cold opens” from NBC’s classic sitcom series The Office includes Randall Park joining the show’s cast while posing as Jim Halpert, regularly played by John Krasinski, to throw off co-worker Dwight Schrute (Rainn Wilson).

Park recently revealed to Conan O’Brien that he completely forgot about appearing in The Office and couldn’t figure out why people on the street would call him “Asian Jim.”

In an interview on Conan, Park shared:

I was in and out in an hour and I thought, ‘That was really fun.’ And then I just completely forgot about it… Several years later, I’m like walking down the street and this car drives by and a guy yells, ‘Asian Jim!’ And drives off. And I’m thinking, ‘Is this some racist thing that I don’t know about?’ I thought it was a hate crime because I had forgotten about my appearance on The Office.

Randall Park also shared that he deleted all of his social media last year to distance himself from various platforms’ toxic nature. As a result, he was unaware of his newfound popularity surrounding Jimmy Woo and other roles throughout his career.

I thought it was a hate crime because I had forgotten about my appearance on ‘The Office’.

While Park’s cameo on The Office is small, fans will never let the actor forget about it again. While identity theft is not a joke, “Asian Jim” hit it out of the park with knowing every bit of Jim Halpert’s daily routines and how to respond to Dwight Schrute’s perplexing questions. In an attempt to play a prank on Dunder Mifflin’s assistant (to the) regional manager, Asian Jim and Pam Beesly (Jenna Fischer) took it to a whole other level.

The two-minute scene spawned unforgettable quotes and a fan-favorite moment from The Office. Although the tv series is over a decade old, this scene lives on in every Michael Scott fan’s heart and strengthens the FBI Agent Jimmy Woo fandom to the multiverse and beyond.

Hopefully, we’ll see Jimmy Woo in the Marvel universe as the Multiverse is ever-expanding. Wandavision set the stage for Doctor Strange in the Multiverse of Madness and Captain Marvel 2, and hopefully, Randall Park will make an appearance in them.

Did you like Randall Park in The Office? Let us know in the comments below!