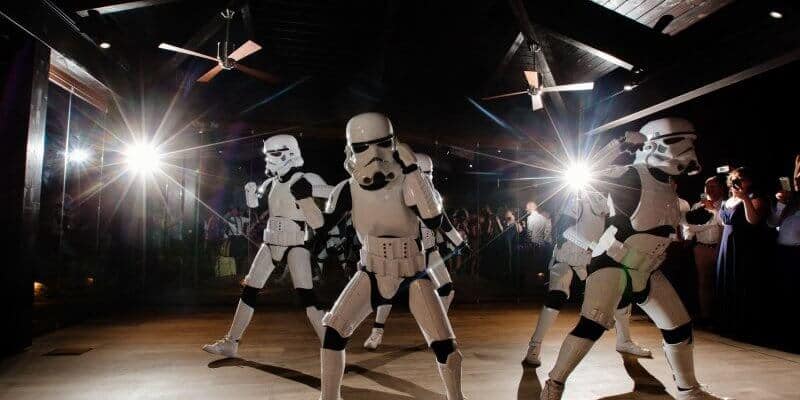 If there’s one place you can be sure people are going to have an opinion about, well, absolutely everything, it’s the internet. Reddit users, in particular, are never shy about sharing what they think.

Now, the social media website has a lot to say about one future groom’s desire to have a Star Wars wedding.

Related: One With the Force: ‘Star Wars’ Wedding Ideas

The original Reddit post about the Star Wars themed wedding debacle has the lengthy title, “Groomzilla want [sic: wants] to have a star wars wedding and don’t listen to fiancee, if should have a separate star wars party”. It reads, in part:

“Star Wars has been a huge influence on my life, ever since I was a kid. I’ve watched all the movies more times than I could possibly count and it’s something nearly all my family/friends enjoy too. So when I was thinking of wedding planning ideas, it seemed obvious that we should be doing something Star Wars-related.

I’ve been brainstorming ideas and I have some really great themed ideas, for example:

If you’re as skeptical as Anakin Skywalker appears to be above, don’t fret — there’s even more where that came from.

“While I have more typically ‘nerdy’ interests, my fiancée isn’t really interested in most movies or games. She’s very much a typical ‘girly girl’ and the type of person who has been planning her wedding since she was very young. She has some very specific ideas about what our wedding should look like (much more formal and glamorous than I’d imagined) and her vision definitely doesn’t include lightsabers.

The problem is that my fiancée really doesn’t want anything Star Wars-related at our wedding at all. All of my suggestions so far have been shot down without further discussion.”

The poster’s ideas for his own personal Star Wars day, that may or may not fall on May the Fourth, continued even further — we’re not even sure Han Solo would fully agree:

“One solution I suggested was that we could plan half the wedding, like she handles the ceremony and I plan the reception. That way we could both have what we want. However, my fiancée says that plan would make me the a****le because even having a Star-Wars themed reception would be an ’embarrassment in front of everyone we know’.

From my perspective, this is my wedding too and I should get to decide at least HALF of the day. While money isn’t much of an issue, we share finances so I’m paying enough to get a say too.”

Readers had all kinds of opinions about whether or not the “groomzilla” should be allowed to commandeer his wedding theme to make his guests feel as though they had entered a galaxy far, far away.

CrabMom15 provided a level-headed response to the situation:

“I don’t think he should have to necessarily hide it [his Star Wars fandom]. I think he can do the cuff links and socks and the signature drink, but having groomsmen dress up and having stormtroopers at the wedding will take attention away from the actual couple getting married. Also, these are the pictures they’ll have for the rest of their married life. I don’t think it’s fair to the bride to suggest to put his groomsmen in Jedi robes. She definitely should let more small things go but he’s being outrageous. I think her fear may be that if she gives an inch he’ll take a mile and dancing stormtroopers will show up. She doesn’t like Star Wars so I don’t think it should be featured or brought to the guests attention. Subtle things are fine, but taking over the wedding with a movie franchise his wife doesn’t care about is not.”

Another user, Kiruna235, also suggested that the groom try to compromise with his wife-to-be:

“Especially with the way OP brings up suggestions and vision of the themed wedding; while reading the original post, what came to my mind was a Star Wars con instead of a wedding. For anyone who’s not a hardcore fan, that would be a hard pass. If this was how he had tried to sell it to the fiance, can’t say that I blame fiance for saying no.

As the one wanting the themed wedding, it would be up to OP to make the sell and offer ways to show how his theme could work with hers (i.e. Show her the middle ground between his theme and her theme). That’s the way negotiation works.”

If the groom in question needs some assistance with negotiations, we’re sure Princess Leia would be thrilled to provide him with some tips from her years of intergalactic political experience.

Even Fox News chimed in on the Star Wars wedding planning drama, reporting:

“In general, the commenters took the bride-to-be’s side, with one user explaining, ‘My biggest take away is the theme of the wedding should be about love and if they have never bonded over Star Wars, then why should it be included? I mean maybe the blue drinks and having a bartender dressed as a Jedi or stormtrooper, but this is his passion and interest, not hers. You only do themed-wedding of that magnitude when it’s a shared interest.'”

Some couples do pull off fun Star Wars-themed wedding touches! One couple put together a Star Wars themed event that coincided with the release of the final Skywalker Saga movie, Star Wars: Episode IX – The Rise of Skywalker (2019).

And, for an epic first dance routine, check out the video below of Boogie Storm performing at a Granada, Spain reception:

We want to know what you think! Should this Star Wars-loving groom get to plan “half the day,” or should he concede to subtle Star Wars touches at his nuptials?