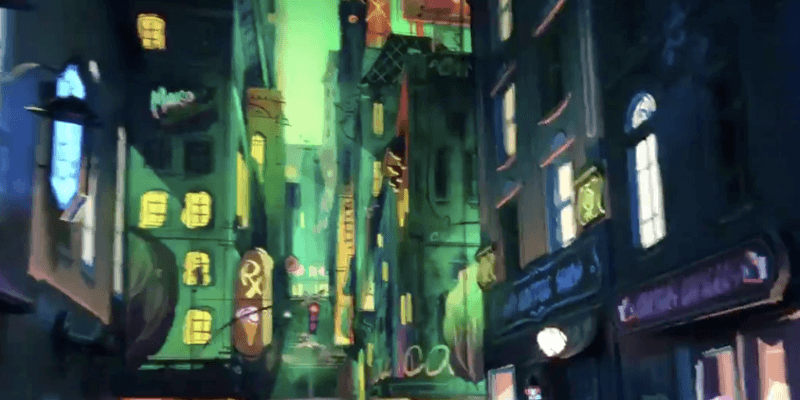 If you have been on Walt Disney Imagineering’s fantastic attraction, Mickey & Minnie’s Runaway Railway at the Chinese Theater in Disney’s Hollywood Studios, you know that a lot of the attraction uses makes use of large screens to immerse Guests in a virtual reality world.

When you ride Mickey & Minnie’s Runaway Railway, the attraction uses multiple layers, from animatronics to background screens to create a multilayered visual for the rider, bringing classic 2D animation to life. The attraction debuted at Walt Disney World Resort just over a year ago and does not malfunction too often, but recently, the attraction’s screen was glitching, breaking the rider’s sense of immersion.

MagicbandManiac (@MagicbandManiac) recently reported that while riding the attraction at Hollywood Studios, in the cityscape scene, the background was glitching with a black column constantly appearing vertically down the entire screen.

One of the screens on railway is glitching. pic.twitter.com/8StJVArcW0

And, not only was the background screen in this attraction not functioning correctly at the Disney park, but neither was Donald Duck! If we take a look at the below video, we can see that his face has black lines appearing quite often.

Donald was also a little messed up. pic.twitter.com/BrsXLdyRHA

Although the glitch was reported yesterday, it seems that today, the attraction has temporarily gone down, as we can see reported on WDW Stats (@WdwStats) on Twitter. We are unsure at this time, however, if the temporary closure has anything to do with the persisting glitch on the attraction.

Attractions often have temporary closures at all Disney Parks, and often, Cast Members are able to quickly resolve any issues so attractions can open up once again. Most recently, we reported that Carousel of Progress went down, as well as Big Thunder Mountain Railroad and Jungle Cruise at Magic Kingdom. That being said, all three rides were back up and running the same day as their initial closures.

In rare cases, attractions are down for an entire day — a situation that occurred with the popular Space Mountain roller coaster not too long ago.

Do you think that having a screen glitch on Mickey & Minnie’s Runaway Railway ruins the attraction? Or can you look past it?

If you want to stay ride this attraction, why not book a vacation today. You will be minutes from Magic Kingdom, EPCOT, Disney’s Hollywood Studios, and Disney’s Animal Kingdom — which is perfect for those Guests who want to spend their days making magic in the park, then coming back to their peaceful Disney World Resort. Click here to book today.