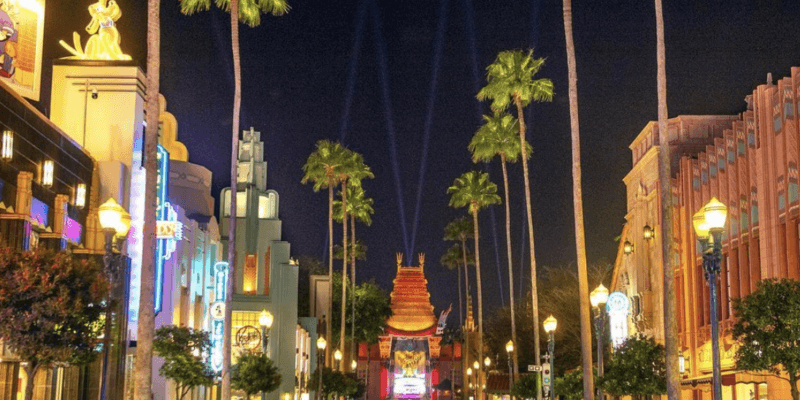 Lately, it seems that when it comes to the 50th anniversary at Walt Disney World, the two main parks we have heard about are Magic Kingdom and EPCOT.

Magic Kingdom, of course, is getting a makeover on Cinderella Castle with regal blues and pinks mixing with iridescent gold, and at EPCOT, Spaceship Earth will forever light up the night sky with a new permanent lighting package! But what about Disney’s Animal Kingdom and Disney’s Hollywood Studios?

Well, for now it looks like we have received an update on Disney’s Hollywood Studios — but it’s not what we thought! Previously, the concept art for the 50th anniversary showcased Tower of Terror displaying what seemed to be a sparkling lighting package. But now, Imagineer Zach Riddley (@thezachriddley) posted a photo to Instagram showing off the new lighting that the Chinese Theater will see!

Check out this first look at the new lighting design our Disney Imagineers will be bringing to the iconic Chinese Theatre at Disney’s Hollywood Studios!

The new nighttime appearance features bright gold accents, all-new energy-efficient LED lighting. But the part I am really excited about is the triumphant return of spotlights searching the sky as the theatre welcomes guests to the premiere of the latest Mickey Mouse short at Mickey & Minnie’s Runaway Railway. This is a culmination of years of work by our teams to bring “premiere night, every night” energy to this iconic golden age of Hollywood architecture. I love when our teams are able use their unique skills to enhance the stories within our parks and this definitely showcases what our Imagineers ingenuity.

It truly will feel like a red-carpet celebration now when Guests arrive to Hollywood Studios with the new spotlight lighting!

Do you like the new lighting on the Chinese Theater at Hollywood Studios? Or do you think is it too subtle?