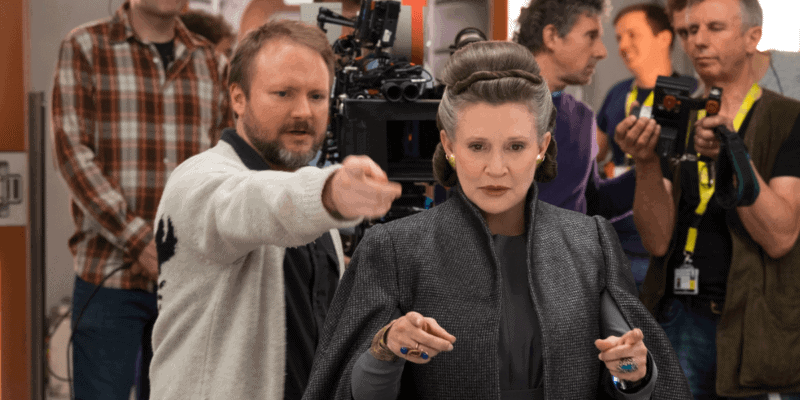 Love them or hate them, the Star Wars sequel trilogy certainly sparked a lot of controversy between fans on social media. Despite opening many new doors for the Star Wars universe and collectively grossing over $3 billion, recent reports have highlighted the lack of communication and control between directors J.J. Abrams and Rian Johnson for their respective films.

Star Wars: Episode VII – The Last Jedi is, without a doubt, considered the most jumbled mess out of the nine Star Wars films, with The Rise of Skywalker right on its heels.

Since the start of production for The Last Jedi, director Rian Johnson and Lucasfilm received major backlash from fans online. The heckling continued after the movie’s release in 2017.

One of the most controversial moments in the latest installment, Star Wars: Episode IX – The Rise of Skywalker (2019), was the unprecedented kiss between Ben Solo (Adam Driver) and Rey (Daisy Ridley). Many fans were not expecting such a passionate embrace between the two.

On top of that, no one expected Kylo Ren’s transformation into Ben Solo but ultimately dying.

Me, irritated because I realize that killing Ben Solo was not always the plan. Rian notices my expression and sigh of disgust

In a recent, private Zoom call with author Sarah Wilson, Rian Johnson was questioned if he knew about Ben Solo’s death since The Last Jedi. Johnson responded:

A short and simple answer, but Rian Johnson confirmed that he had no idea about Ben Solo’s demise in Star Wars: Episode XI – The Rise of Skywalker (2019).

It’s unclear if this means that plans to redeem Kylo Ren as Ben Solo was kept a secret from Johnson and Ben Solo’s sacrifice for Rey at the end of The Rise of Skywalker, but it’s clear he was as shocked as any fan.

Furthering claims by many that last-minute changes were made late in the Star Wars sequel trilogy development, it appears that Lucasfilm was heavily focused on allowing creative freedom between each director more than creating a fluid storyline.

“Rian did his best to tee up a bunch of things and tried to bring [The Last Jedi] to a point where there were lots of places the story could go. He didn’t want to be unfair to the next director and leave a lot of possibilities. He wasn’t trying for a specific outcome for the end of the series. But to have lots of dramatic potential for [Episode IX]. He answered my question again by saying he didn’t know whether Kylo would live or die, then quickly corrected himself to say he didn’t know whether *Ben* would live or die, and how the series would resolve.”

Since The Walt Disney Company’s Investor Day did not include any information on Rian Johnson’s future involvement with Star Wars indicates that his future trilogy has been scrapped.

“At the beginning, they were toying with an Obi-Wan connection. There were different versions and at one point she was no one… it kept changing.”

In a press interview with Popcorn With Peter Travers, Abrams jokingly connected the plot points between Star Wars: Episode IV –  A New Hope (1977) and his own Star Wars: The Force Awakens (2015) and then questioned his audiences’ sanity if they enjoyed the film. While it’s unclear if Abrams was merely kidding around, it’s apparent that opinions on his Star Wars installments have gotten to him.

In the eyes of many Star Wars fans, there’s no saving the sequel trilogy. While recent rumors suggest Disney could “retcon” the three most recent Star Wars movies, fans are still split on opinions over the finished projects.

Rian Johnson’s later work Knives Out (2019) is considered one of the best murder mystery films in recent years, and the director earned the director the respect of many viewers of his previous work, but not all.

Despite ongoing rumors, reports suggest that Rian Johnson’s trilogy has been seemingly scrapped. However, the House of Mouse announced series coming to Disney+ and future feature films with the talent of directors Taika Waititi and Patty Jenkins.

What do you think of Rain Johnson not knowing about Ben Solo’s death? Let us know in the comments below.