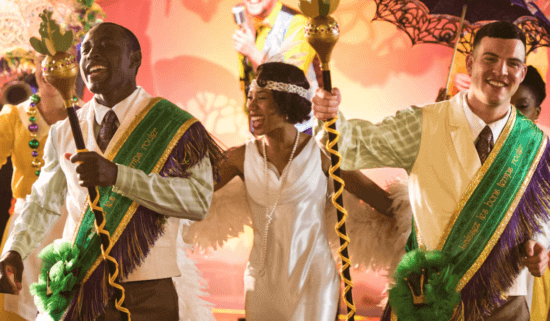 If you are a Disney Cruise Line fan, you are probably itching to hop back onboard to visit Castaway Cay — or, perhaps you just want to be in the middle of the ocean again with the magic of Disney surrounding you. You may, however, also be wondering: “What is going to be there for me once I do get back on a DCL ship?”

If we take a look at how Disney Parks like Disney World were able to reopen amid the pandemic, we see that phases were a big part of the process. In order to keep Guests and Cast Members safe, many experiences — including live entertainment and fireworks shows, for example — were temporarily suspended.

As a matter of fact, Disney theme park entertainment has still not fully resumed — although new socially distanced character meet and greet options are being added on a regular basis.

If Disney Cruise Line were to eliminate — or even significantly decrease — entertainment, though, it would pose a major problem, since cruise ships don’t have the luxury of a theme park to immerse Guests in the Disney magic.

Characters and stage shows are a major part of the magic onboard any Disney Cruise Line vessel.

Now, it seems that Disney has confirmed that once Guests are able to book staterooms on the Disney Dream, the Disney Fantasy, the Disney Magic, and the Disney Wonder, there will be characters there to greet them! Disney was recently hiring character performers (specifically, Moana, Jasmine, and Mulan) for Disney Cruise Line. The listing — which has now been removed — indicated that the characters would be available for entertainment events, meet and greets, and stage appearances.

As mentioned, the Disney Auditions page no longer has an active posting for this role, so it is likely that the listing has closed, perhaps due to the positions being filled. The reason has not been confirmed, however.

That being said, knowing that Disney is actively hiring character performers for Disney Cruise Line days after Disney CEO Bob Chapek shared his hopes that DCL would be back by Fall 2021 shows promise that this prediction may actually come true.

The decision of whether Disney Cruise Line will sail again this year will ultimately rely on whether or not all of the ships in Disney’s fleet have received their conditional sailing certificates, per CDC guidelines. The fact that Disney is actively hiring new Disney Cruise Line Cast Members is a positive sign, even though nothing has been confirmed regarding a return to sailing.

This job posting isn’t our only clue that points towards Disney bringing back characters on cruises. We recently reported on a new DCL commercial entitled, “Let’s Dream”.

The commercial showcases what sailing will be like in a pandemic world, as Guests wear masks aboard the ship. In this commercial, viewers are also able to see Minnie Mouse and Princess Tiana from Princess and the Frog.

Related: Fans Are Dreaming of a Disney Cruise, But How Soon Will They Sail?

On top of the commercial, the latest Disney Cruise Line ads and social media postings include characters, as well. For Disney to be promoting Disney Cruise Line’s return with characters included, it would be odd to see them remove the offering once sailing actually resumes.

Life gets a lot more magical when you dream, and Disney Cruise Line has provided decades of dream-worthy vacations.✨ https://t.co/HV18dqGcmE pic.twitter.com/P0jyci09XG

As of now, Disney Cruise Line is not sailing through May 2021 on the Disney Dream, the Disney Fantasy, and the Disney Wonder. The Disney Magic has canceled sailings until August.

Please note that Disney seems to continuously cancel their sailings, and considering that Chapek’s hopeful return is not until much later this year, it is likely that Disney Cruise Line officials anticipate canceling cruises until then. ITM will continue to provide updates from Disney as they become available.

Do you plan on returning to Disney Cruise Line this year? Would characters aboard the cruise ship be a make-or-break deal for you?

If you want to avoid any of the stress that booking a Disney vacation during the pandemic may cause within the cruise industry, let our friends at Academy Travel help you out! You can head to Port Canaveral without worry for your future cruise, and if something goes wrong, Academy Travel will always be ready to help. Click here to get started today!