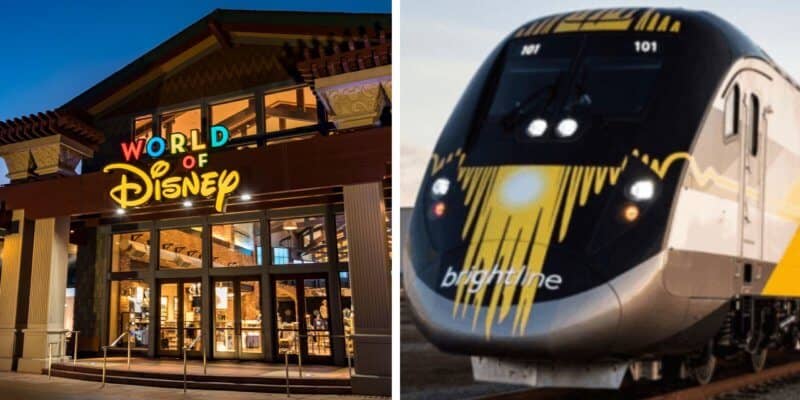 With Magical Express transportation option ending in 2022, many Guests may be wondering how they will be able to transport themselves to Disney World when on vacation!

Although Disney has not noted if they will be offering an alternate service for Guests, we do know that the Brightline train will be implemented in Orlando International Airport, and it will have a stop on Disney World property.

The Brightline train service is set to bring Guests to Disney Springs but will also take them to different spots in Orlando as well as, including other popular Florida locations such as the Kennedy International Space Station area, West Palm Beach and Tampa Bay, which will allow Disney World Guests the ability to explore more of Florida on their vacation without renting a car.

Now, thanks to the Orlando Sentinel, we have some additional information surrounding the upcoming Brightline transportation. Per their report:

This is an interesting development, as the station was previously noted to be ready in 2023. Now, if it will take five years to complete, it seems that Disney World may not have a connection to MCO until 2026, according to Cegelis.

So how much does a train system like this cost to build? It seems that right now, Brightline has a few options in terms of what kind of route they want to build from MCO to Disney Springs, but it seems that the most cost-effective option will be the S.R. 417 alignment. Orlando Sentinel reports:

The S.R. 417 alignment would cost $1.03 billion, require 342,000 square feet of bridges, involve three private properties and offer efficient sharing of corridor space with a proposed SunRail link between the airport and its mainline.

The other route would cost the company double and was a previously proposed “ill-fated proposal for high-speed rail between Tampa and Orlando” back in 2010.

For now, it seems that the Brightline still has a lot of work to do before it can run a train through the mouse house! Stay tuned to Inside the Magic as we continue to report on what is next for the new train station.

Would you take the Brightline train from Orlando International Airport to Disney Springs? Would you use the train on your Disney vacation to travel to other areas in Florida?

If you want to plan a Disney vacation and soak in those final moments of the Magical Express, you need to plan today! Magic Kingdom, EPCOT, Disney’s Hollywood Studios, and Disney’s Animal Kingdom are all planning out their big celebrations for the big 50th anniversary celebration, and you can be there too to share the magic with Mickey Mouse, Minnie Mouse, and all of the other Disney fans! Click here to get started today.