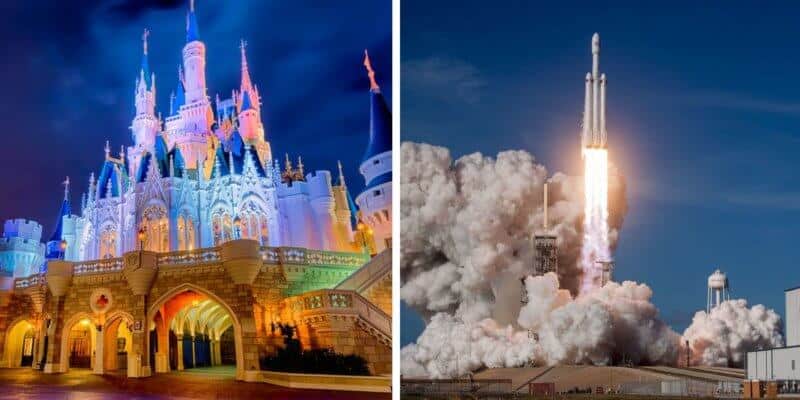 We may not have Tinker Bell flying from Cinderella Castle at the end of Happily Ever After at Magic Kingdom right now, but yesterday evening, Disney Guests received another show. There was a SpaceX launch on Thursday, November 5th, and it was seen all over Disney World Property — including Magic Kingdom.

The Falcon 9 Rocket launched from the Cape Canaveral airforce station yesterday evening and truly looked like an evening star shining bright to many Floridians. According to the SpaceX website:

On Thursday, November 5 at 6:24 p.m. EST, Falcon 9 completed its second mission this year for the United States Space Force when it launched the GPS III Space Vehicle 04 from Space Launch Complex 40 (SLC-40) at Cape Canaveral Air Force Station in Florida. Following stage separation, SpaceX landed Falcon 9’s first stage on the “Of Course I Still Love You” droneship, which was stationed in the Atlantic Ocean. The spacecraft deployed approximately 1 hour and 29 minutes after liftoff.

Lucky for us, Michael posted to Twitter showcasing a video of the Falcon 9 getting a birds-eye view of the Magic Kingdom.

Check out the amazing footage below!

Michael was able to capture the rocket slowly moving across the Disney sky, just like a magical shooting star. With the Fantasyland music loop playing in the background, this truly seemed like a magical and unique Disney experience that Guests were able to view.

To make the moment even better, we can see surrounding Guests take in the view with Christmas decorations wrapped around Magic Kingdom, really setting the tone for a special occasion. In the video, we can hear Disney Guests sing the classic Wishes song, “Starlight, star bright, first star I see tonight. I wish I may, I wish I might have the wish, I wish tonight. We’ll make a wish, and do as dreamers do, and all our wishes (all our wishes), will come true”.

Did you see the SpaceX rocket launch?

Comments Off on VIDEO: SpaceX Rocket Launched Over Magic Kingdom!