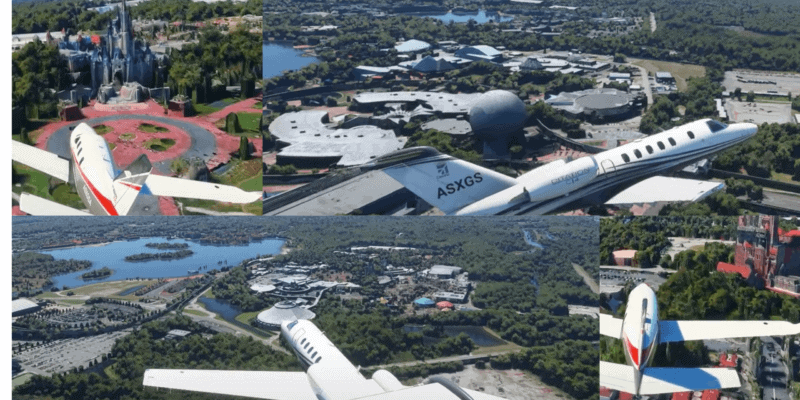 It’s pretty common knowledge that flying over select parts of Walt Disney World isn’t allowed. In fact, these rules have been in place permanently since 2003 (after being put in temporarily following 9/11). There are certain allowances (which we will come onto later) but in 2020 you can get a close-up view of Walt Disney World from the sky yourself, without ever having to set foot in a real plane thanks to Microsoft Flight Simulator 2020.

The new video game allows you to travel anywhere in the world. Don’t believe us? Check out this TikTok below of a quick flyover of some of the most popular areas of the Walt Disney World Resort. It includes the Magic Kingdom, Disney’s Hollywood Studios, EPCOT and Disney’s Animal Kingdom:

As this is a new video game (out this week in fact) the graphics are incredible and you can really see the level of detail put into locations around the Walt Disney World Resort. Airspace is restricted in the 3,000 feet above the Magic Kingdom and within a three-mile radius of Cinderella Castle so this is as close as you will ever get from the air to the parks.

Related: Aerial photos show how empty Walt Disney World has been since reopening

Here’s a more detailed video taking you through both Walt Disney World and Universal Orlando:

As we mentioned earlier, the entire world is explorable in Microsoft Flight Simulator 2020 so the likes of Disneyland Resort, Disneyland Paris, and even the Shanghai Disney Resort can be explored!

Related: Check out these awesome aerial photos of Disneyland

If you’re looking to visit Walt Disney World in ‘real-life’ then why not get in touch with our awesome friends at Academy Travel. No matter what your Disney Parks needs. the team will be able to help you to book your next magical vacation. Contact their team now for a free quote!

What do you think of these virtual flyovers of Walt Disney World? Let us know in the comments below!

Comments Off on Fly Over Disney World in Microsoft Flight Simulator 2020!