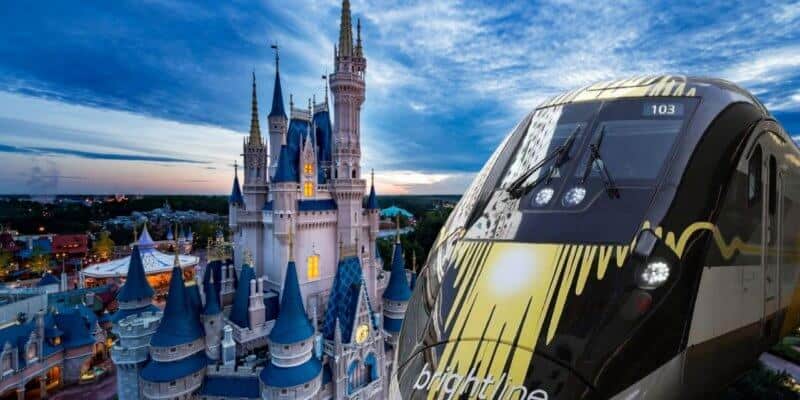 We had heard rumblings that Brightline wanted to build a high-speed train that connected Disney World to many other Florida destinations, but it wasn’t until recently that this project was confirmed. And now more than ever, it seems that you really don’t need to shell out for that rental car on your next Disney World vacation.

We have heard some more news on the Brightline expansion as it pertains to Disney World Guests, and it really is allowing vacationers the opportunity to explore so much more that Florida has to offer without the stress of having to navigate to travel to those locations. Click Orlando recently that, “The president of Brightline Trains met with transportation leaders in Orlando on Wednesday to discuss the company’s expansion project through Central Florida. Patrick Goddard was the guest speaker at the Alliance for Regional Transportation Education Series, which was held at the site of Brightline’s future station at Orlando International Airport.”

In the meeting Goddard announced:

“I view our job for Brightline is to get people from hub to hub. We’re very excited to get the current system opened. This is a very diverse market and it is a perfect market for intercity passenger rail, Cocoa and the Space Coast generally is experiencing pretty significant growth and attention as the space industry starts to take off. I think it’s going to dramatically change the face of our transportation network for decades to come.”

Currently, the project sits at a total cost of $2.4 billion and will extend Brightline from West Palm Beach to Orlando as it currently can be seen running from Miami to West Palm Beach — and by adding Disney Springs as a stop on the rail, Disney World will now be connected to West Florida.
Goddard mentioned being able to access the Space Coast which would be a HUGE bonus for tourist. If anyone is a Star Wars fan and wanted to dive deeper that Star Wars: Galaxy’s Edge at Hollywood Studios, being able to visit the Kennedy Space Center would be a treat! The Kennedy Space Center is a little farther out by car, but if you can kick back and relax on a speed train, it is a lot more appealing. Plus there is so much to do at the Space Center including excursions, attractions, simulators, and more!
For Guests staying on Disney property, you can use the Magical Express to transit to and from Orlando International Airport, the Disney transportation options such as Disney busses, the Disney Skyliner, or the monorail to get around the property, and now you can use the Brightline train to explore even further.

We also recently noted that the Orlando Business Journal provided more information about the project:

At the moment, the trains are set to hit MCO in 2022, more updates to come regarding the Disney Springs station.

Will you use the new Disney Springs Brightline train on your Disney World vacation?