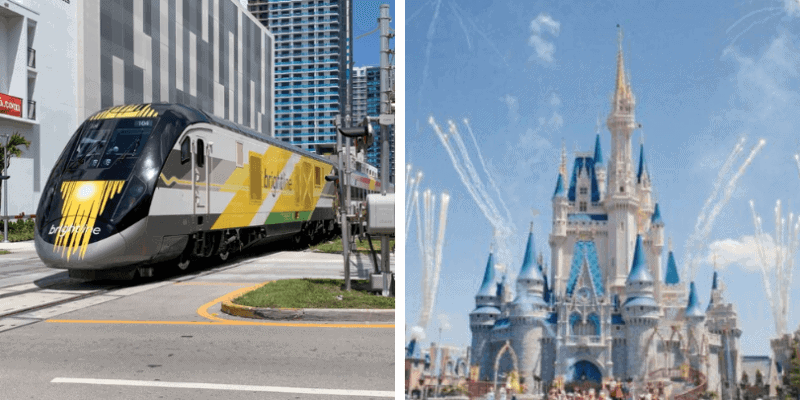 Officials from The Walt Disney Company and Brightline confirmed that advanced talks are underway regarding the addition of a Walt Disney World station.

Disney offices issued a statement in which they said:

“As the top vacation destination and largest single-site employer in the United States, Walt Disney World Resort is an obvious choice for a rail station between Orlando International Airport and Tampa… While we have not yet made any definitive commitment, we have mutually agreed to more formally explore developing a train station on our property.”

Being rebranded as Virgin Trains USA, Brightline currently operates in a South East Florida corridor between Miami and West Palm Beach. Plans are currently underway to connect the West Palm Beach station to Orlando International Airport (MCO). The $4-Billion and 160-mile extension is set to be completed by 2022. Virgin Trains officials have stated the Orlando-Miami route will be a three-hour trip one-way.

Connecting All of South Florida

Virgin Trains USA is not just focused on connecting Orlando to Miami. Their goal is to connect all of South Florida via their comfortable high-speed rail line. From its three original stations in Miami, Ft. Lauderdale, and West Palm Beach, three new stations in Aventura, PortMiami, and Boca Raton are scheduled to open next year.

Brightline Stations are also being considered for areas along the Space Coast as well as locations in the Treasure Coast region, including Indian River, St. Lucie, and Martin counties. Imagine tourists being able to fly into MCO, FLL, or MIA and having relatively easy, comfortable rail access to everything from fishing and surfing to theme parks and space launches.

A Virgin Senior Vice President, Ben Porrit, was quoted saying, “When you look at the millions of out-of-state visitors traveling to Florida, as well as the 21 million residents of the state, providing a car-free option would be a big win.”

If a Walt Disney World Station becomes a reality, it will be a part of an 80-mile extension connecting MCO with a Tampa station. However, the route requires leasing space and right-of-ways granted by the Central Florida Expressway Authority, the Florida Department of Transportation, and the Orlando Utilities Commission.

Virgin’s executive vice president for infrastructure, Michael Cegelis, stated that those negotiations “are taking a little bit longer than we would like them to take but we are going to get it right, and they are in process now.”

The addition of a Lakeland station is also being considered for the route.

Do you think Brightline will a Walt Disney World Station? Would you use the Brightline for a Florida vacation? Let us know in the comments!