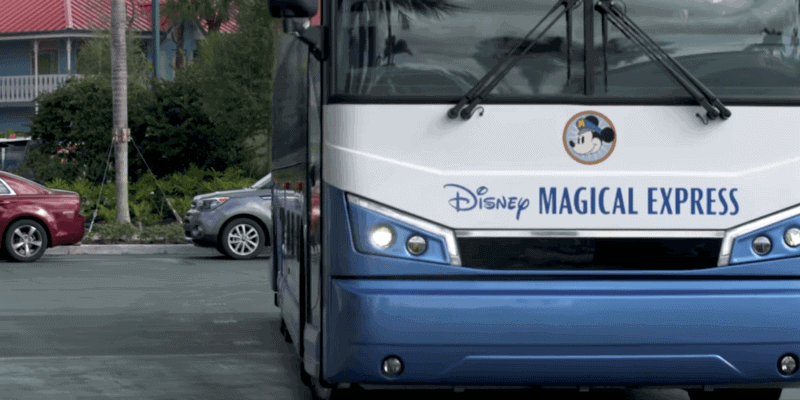 One of the most magical perks of Walt Disney World is, unfortunately, coming to an end in 2022 — Disney’s Magical Express.

In case you aren’t familiar, Disney’s Magical Express is, according to many, one of the best parts when arriving at Orlando International Airport (MCO). The complementary mode of transportation brings magic to Guests before they even arrive on Walt Disney World property.

Luggage delivery for those arriving to and departing from the airport and Resort Airline Check-In Service are no longer available.

What Will Replace Disney’s Magical Express?

At this time, Disney has not announced how they will be proceeding with transportation once Disney’s Magical Express does officially end next year, but we began to speculate on what could come. One option is the possibility of a Disney-owned bus transportation that could charge Guests a fee (similar to Disney Cruise Line).

Related: Will the WDW 50th Bring Back Guest-Favorite Amenities?

Would Guests Pay a Fee for Orlando-Disney Airport Transporation?

Well, we wanted to know how many Guests would opt to pay for a Disney bus transportation (if the company did decide to go that route) or if they would find their own mode of transportation moving forward. And, though I can’t say I am surprised, a majority of people said they would, in fact, pay Disney over a third-party company.

Again, Please keep in mind that Disney has not yet announced how they will be proceeding once Magical Express ends in 2022.

Verna (@vernafloodpanaccio) said if the Disney prices were reasonable, she would certainly pay Disney to provide transportation:

If Disney owned the bus fleet and the charge was reasonable, YES. I DON’T go on vacation to drive myself. I LOVE being picked up at the MCO airport and taken to my vacation.

And Inside the Magic follower Gabrielle (@gabrielleszoo) said though it depends on how much the fee would be, she would still love Disney to provide the transportation so the hassle of arranging anything wouldn’t occur:

Depending on how much they charge… even if it’s a little more than uber, the convenience of not having to arrange anything would be worth it.

Tim (@timcherokee2015) makes an excellent point in bringing up the new Brightline Train that is currently being built at both Orlando International Airport and near Disney Springs. He says once this project is complete, he might opt for the Brightline transportation instead.

If Disney world were to debut a brand new bus transportation that was owned by Disney from Orlando international airport to Disney and charge a fee, I would opt for the Disney owned transportation instead of a third party route. Disney magical express is so convenient for families and involves less hassel than third party routes. Once the new brightline train debut and connects to Disney, then I would maybe change my answer.

While Inside the Magic follower @acapulco_gold shared that as long as the new service provided luggage service, since that was such a convenience for many:

Would they still get your bags for you though? That’s the nicest part about magical express.

This is something that @jsphoto86 also agreed with, stating that they miss the perks — specifically the luggage service that Walt Disney World Resort offered:

Would depend on the price and what’s included. I just came back from WDW and dealing with the luggage was miserable. If all the old perks were included, probably would do it, if the charge was reasonable.

Disney fan Mary D. (@mbdavis099) explained that it depends on cost, but in the long run she would more than likely still opt for Disney-owned transportation when traveling to their Disney hotel:

It depends on cost but considering rental car cost plus having to pay to park on property and gas, it probably would still be cheaper for the transportation system. Uber can get expensive when you have 5 people and need the larger cars.

And lastly, one Inside the Magic follower, Shana C. (@tinychiney_345) gave her insight being an international tourist wanting to travel to Walt Disney World Resort:

I’d pay. I’m an international tourist and to get there without a definite transport (even prearranged can be dodgy due to flight delays etc).

Again, please keep in mind that Disney has not yet announced how they would be proceeding once Magical Express ends in 2022.

If you want to visit Walt Disney World Resort in the near future, but need help planning then don’t hesitate to reach out to our friends over at Academy Travel. The authorized planners will be with you every step of the way when planning your magical vacation — Including helping to arrange airport transportation if needed. You can get started today by clicking here.

Would you pay for a Disney-owned bus service from Orlando International Airport? Let us know in the comments below.