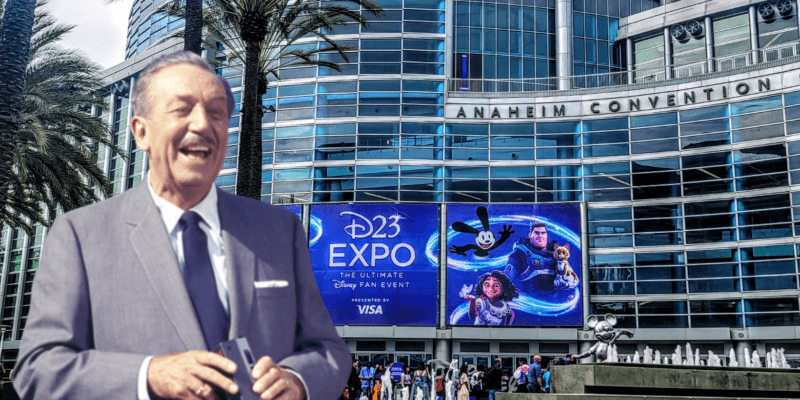 The 2022 D23 Expo, held at the Anaheim Convention Center near the Disneyland Resort, kicked off with an epic Opening Ceremony hosted by The Walt Disney Company CEO Bob Chapek and talk show host Tamron Hall on September 9. More than 7,000 eager Disney fanatics from all walks of life poured through every entrance into Hall D23 only moments before, excited about the upcoming Disney Legends Ceremony, but not one of them could have imagined that Walt Disney himself would have such a prominent role in that morning’s event. And no one saw a warning coming from the visionary himself.

In September 2019, D23, the Official Disney Fan Club, hosted the D23 Expo in Anaheim, and none of the thousands of producers, hosts, celebrities, or guests in attendance could have imagined what lay ahead: a massive global pandemic that would leave millions severely ill or dead in its wake, revolutionize conversations about public health and vaccinations, render every single Disney Park around the globe non-operational, and lead to a brand-new way of accessing entry into the theme parks at Disney World and Disneyland.

And surely no one could have known that the 2019 Expo would be the last one held for three years because of delays brought on by the pandemic.

But that very topic was addressed at the beginning of the Opening Ceremony at this year’s D23 Expo, as fans viewed a video put out by D23, especially for Day 1 at the Expo. The video depicted scores of Disney fans at the D23 Expo, many of whom shared a quick sentence or two about what they love most about the largest gathering of Disney fans in the world, which usually takes place every other year. The entire video presentation was set to the song “Dream,” originally recorded by The Cranberries, which received an energized and upbeat Disney treatment just for the occasion.

The message was loud and clear:

“We are back together again to share the Magic. It’s all been leading to this. From all of us to all of you, the greatest fans in the world, welcome home!”

But before the “welcome back” presentation began, before CEO Bob Chapek took the stage, before co-host Tamron Hall was introduced to the audience, and before any other part of the Opening Ceremony took place, the visionary, the genius, the man behind the imagination that began the Mouse who began it all–the innovator and creative genius Walt Disney himself, took center stage that day.

“I hope you enjoy the show,” Walt said in a video projected onto the large screen above the stage. It was as if he were alive and broadcasting from another location. It was like he was very much aware that fans had gathered yet again to celebrate all things Disney.

And then, he issued a warning to the more than 7,000 fans in attendance at the ceremony.

“Incidentally,” Walt added, “have a handkerchief ready; if you’re like me, you’re not only going to laugh a lot, but you’re going to shed a few happy tears.”

The crowd roared with delight at Walt’s image on the screen and the words that were spoken, and for some in the audience–this writer included–there were a few moments after the screen went dark during which it seemed as though Walt Disney were right there inside Hall D23 as well.

You can see the brief address from Walt at the very beginning of this video:

Walt’s warning couldn’t have been any more fitting. Not only were audience members treated to the video presentation that welcomed fans back after 3 long years, but they were also given the exclusive opportunity to view a moving and emotionally-charged 8-minute-long video presentation that took a look at the first century of Disney and all that first 100 years of Disney brought to life.

Fans in the audience found themselves on a roller coaster of emotions that would have rivaled any Disney Parks thrill ride as they laughed out loud, stood up to cheer, wiped away a stray tear, smiled quietly, laughed some more, wiped away several more tears, and roared with laughter yet again. Yes, for several minutes that morning inside Hall D23, a childlike innocence befell us all, a blanket of wonder and hope fell on the crowd, and an overwhelming sense of gratitude to Walt for all he accomplished welled up inside every diehard fan in the room.

It was an exciting and moving look at so many of the things that Disney’s hands and influence touched–things from which we continue to draw joy, wonder, and a return to childhood, even today.

And I only hope we never lose sight of one thing: that it all actually began with a man named Walt–long before the mouse ever came along.