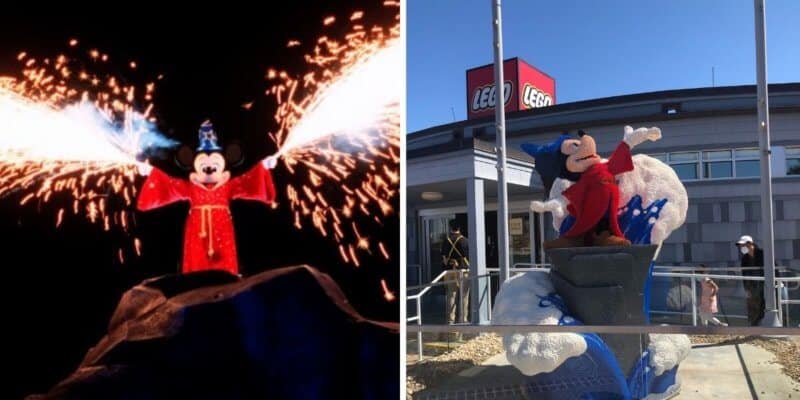 Walking by the LEGO store at Disney Springs often leaves Guests in awe of what they are seeing. There are always larger-than-life statues built by LEGO that create some of the best photos, and now, there is a new statue in town.

Fantasia is one of the most groundbreaking Disney films that the Walt Disney Company ever created. Debuting in 1940, the film recently turned 80 years old, and it seems that LEGO wanted to celebrate the commemorative moment.

Now, the Disney Springs LEGO store has updated their outdoor LEGO works of art with a Fantasia representation of the classic Sorcerer Mickey.

That being said, the statue also reminded this reporter of a show that has yet to return to Disney World.

When Walt Disney World Resort reopened amid the COVID-19 pandemic, much of the Resort’s entertainment was temporarily cut for health and safety reasons. All evening nighttime spectaculars were suspended, for example, and have not returned — with the exception of the Electrical Water Pageant.

However, with Walt Disney World Resort beginning its 50th anniversary celebration in a matter of months, in combination with the COVID-19 vaccine beginning to roll out, some Guests are wondering when evening shows will return to the Disney Parks.

Happily Ever After is a tough show to have return to Magic Kingdom as there is no assigned seating, and it is a show that draws all Guests to a small section of the park, creating quite the crowd and eliminating the ability to social distance. However, there are nighttime shows that could allow for social distancing. One of these is Fantasmic!, which has been getting a lot of buzz lately.

Because Fantasmic! takes place in the Hollywood Hills Amphitheater, Disney could theoretically space out the show the way they have for For the First Time in Forever: A Frozen Sing-Along Celebration, which also takes place at Disney’s Hollywood Studios.  The lagoon in which the show takes place has been drained for some time, but that has not stopped Disney from getting Guests back into the Fantasmic! spirit.

First, the Fantasmic! preshow music began to play once again in the amphitheater during park hours. Then we saw the My Disney Experience app update the attraction icon to Sorcerer Mickey. We most recently reported that three permits were filed for the theater, which could be to get not only the lagoon back in action but also, to create a socially distanced seating area where Disney can once again operate the show in a safe way.

With the LEGO Mickey Mouse standing on the top peak of a rock with water rising around him, it is easy to flashback to a time when you were watching that happen in real life at Disney’s Hollywood Studios, or perhaps cozy on the couch watching Fantasia. The LEGO store always has magnificent sculptures created around the store that often last a year or two, and are then taken down and replaced with a new version.

Disney has yet to announce when Fantasmic! will return, but with all of these ‘Easter eggs’ being dropped about the attraction, it seems Disney is moving progressively when it comes to the show.

When do you think that Fantasmic! will once again open?